Major Sharon Rivlin, a judge at the Ofer Military Court, accepted as admissible the testimony of a 14 year-old Palestinian boy who was unlawfully arrested in the dead of night, questioned without being allowed sleep, denied his right to legal counsel and not told of his right to remain silent.

A motion to rule inadmissible the confession of 14 year-old Islam Dar Ayyoub from the West Bank village of Nabi Saleh was denied by a military judge yesterday. The motion was part of a trial-within-a-trial procedure at the Ofer Military Court, where the boy is being charged with throwing stones. During the trial, it was proven that the boy’s interrogation was fundamentally flawed and violated the rights set forth in the Israeli Youth Law in the following ways:

The boy was arrested at gunpoint in the dead of night, during a violent military raid on his house.

The above mentioned Israeli Youth Law and the protection it is meant to ensure for minors during their interrogations is not officially part of the Israeli military code for trying Palestinians in Israeli military courts. However, the Military Court of Appeals repeatedly ruled that it should be applied when interrogating Palestinian minors in the Occupied Territories nonetheless.

Nevertheless, the military judge determined that the boy’s confession should not be ruled inadmissible, saying that “In my opinion, the infringement on the defendant’s rights in this concrete case, did not amount to a violation of his right in a way that will sufficiently endanger his right to a fair trial […].” The decision was made despite a psychiatric expert opinion handed to the court which determined that a boy of 14 undergoing such an interrogation could not be considered to have given a statement of his own free will.

Adv Gaby Lasky, the boy’s lawyer, said, “A reality in which the military court decides to accept the confession of a 14 year-old as admissible evidence despite severe and undisputed violation of his rights during both his arrest and interrogation, is unacceptable. It is an incomprehensible decision, unveiling the fact that legislation allegedly intended to protect minors’ rights is no more than lip service when Palestinians are concerned. This ruling sends a clear message that illegal arrest and interrogation of Palestinian minors can continue unhindered.”

See here for the defense’s closing arguments (in Hebrew).

See here for the judge’s decision (in Hebrew). 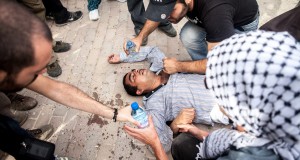