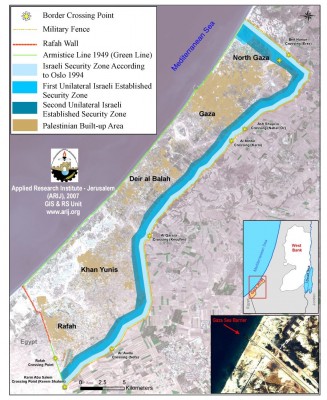 In a peaceful demonstration into the Gaza no go zone that began around 10:30am today, January 24 2012, demonstrators report that at least 50 rounds of live ammunition were fired directly at Palestinian and international solidarity activists.

At least two Israeli soldiers have been visible on the ground, while a large military tank also took position approximately 15 minutes following the initial shooting of live ammunition.  With a momentary pause in gunfire that lasted for approximately 15 minutes, shooting of live ammunition has resumed in Gaza’s No Go Zone. At least 50 bullets have been shot thus far.

Every Tuesday Palestinians and supporters march from Beit Hanoun into the buffer zone , where the fertile land has been made inaccessible to Palestinians due to the imminent danger of violence by the guarding Israeli military, who also bulldoze land that has been an agricultural resource for many locals in the northern Gaza Strip.
Buffer Zone Gaza Live Ammunition 2012-01-24
Yara