“The other children keep talking about Dima and the memories of both incidents. ‘We wish to die like Dima’ is what the children sometimes say to me because of all the stress and our poor living conditions.” 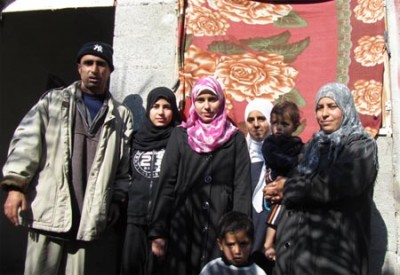 On 8 January 2009, at approximately 11:00, four missiles were fired at the house of Juma’a al-Rahel (45) in Beit Lahiya, injuring 3 members of the extended al-Rahel family: Basma (3), Dima (5), and Faten (41). Many of the extended family were inside the house at the time of the attack, as six of the al-Rahel brothers and their wives and children live nearby. Immediately after the attack, the families fled the area and sought refuge in Beit Lahiya’s UNRWA school. On 17 January 2009 the school was targeted with white phosphorus bombs, leaving Dima’s sister, Ansam al-Rahel (13), severely injured. After six weeks of fighting for her life 5-year old Dima eventually died of her wounds in an Egyptian hospital on 1 March 2009.

Saeed al-Rahel (35), the father of Dima and Ansam, remembers the day of the first attack vividly. “I was at home when an explosion took place and all the windows were broken. I got out of the house. I heard people screaming in the house of my brother Juma’a, nextdoor. My daughter Dima was there and I heard people screaming that she was wounded. Several more missiles struck Juma’a’s house and we fled from the area. Dima was taken to hospital. On 13 January she was transferred to Egypt. I went with her.”

Saeed’s wife, Nisreen al-Rahel (33), and their other children, Sunia (17), Dina (15), Ansam (13), Ahmad (11), Mohammed (6), and Ali (4), stayed in the UNRWA school in Beit Lahiya after the attack. Nisreen recalls: “we stayed in the school building from 8 to 17 January. It was winter and very cold. We didn’t have any mattresses. We had to use blankets as mattresses and it was very difficult, especially for the children. We didn’t have enough food. We also had to ask other people to give us water. There was no clean water.”

On 17 January 2009 the Israeli army bombed the school building with white phosphorus shells. “Experiencing the attack on the school was more difficult for me than the attack on the house. At the moment that the bombing of the school started I was in a classroom with my children. The bombing started around 5:00am and it was dark. I heard Ansam cry ‘I am wounded in my head’. The firing of bombs was very intensive.” Ansam was severely injured in the head, she lost her hair in the place of the injury and the scars get infected from time to time as parts of her skull are missing. “She is still suffering because of her injuries. At school she loses consciousness when she is active,” say Nisreen.

Saeed remembers the moment he found out about the bombing of the school: “Before I went to Egypt I stayed in that same classroom with my family. I saw the attack on the television when I was in Egypt and I recognized the classroom. There was blood on the floor. When I called to my family, no one wanted to tell me how my daughter Ansam was doing.”

When Nisreen and her remaining children moved back to their house after the offensive they found it badly damaged and their livelihood destroyed. “Shortly before the war I bought cattle. We had 2 oxen, 17 goats and dozens of rabbits. I kept them next to our house. I took out loans to buy them,” explains Saeed. “When our family returned to our house after the war they found all the animals killed by shrapnel. Only one goat was still alive but he also died after a few days. Now I am stuck with many loans. I can barely provide for the treatment of my daughter Ansam. I was even arrested by the police because I cannot pay back my loans to people. With a complete lack of money I am also not able to repair the severe damage that was done to the windows and walls of our house.” Cardboard and blankets serve to protect the family from the nightly and winter cold.

The events of January 2009 have had a profound impact on the psychological wellbeing of the Saeed, Nisreen, and their children. “It has been very difficult for me because I lost one of my daughters and another one was badly injured. I remember Dima when I see girls going to school,” says Nisreen. “The other children keep talking about Dima and the memories of both incidents. ‘We wish to die like Dima’ is what the children sometimes say to me because of all the stress and our poor living conditions.”

Saeed noticed changes in his children too. “Ansam holds a lot of anxiety and stress since the war. One time I called her and she started screaming and threw a plate at me, screaming to leave her alone. I am her father and she is afraid of me.” Nisreen adds: “Ahmad’s scores were badly affected after the war. He used to be an excellent student. Now he even has problems in reading. He also suffers from bedwetting.”

Fear seems to have become a part of daily life for the family. ”The children, like me, are always afraid when they hear drones or firing. When we hear it, we all sit in a single room,” says Nisreen. The fear of another attack is never far from Saeed’s thoughts either: “I am afraid that another war will come. When people talk about it I feel afraid. When I hear drones in the area, I leave the house. I get afraid that they will target us again.”

PCHR submitted a criminal complaint to the Israeli authorities on behalf of the al-Rahel family on 9 September 2009. To-date, no response has been received.