“It would be great if someone could take me to the dessert and leave me there, that way I wouldn’t have to see people” 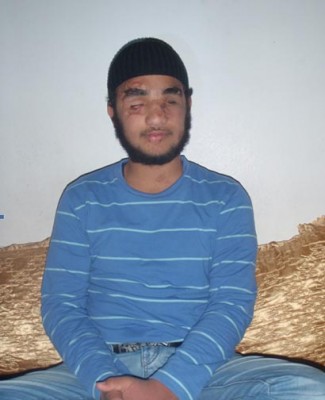 At around 09:30 on 7 January 2009, Israeli forces targeted the al-Taqwa Mosque in the Sheikh Radwan district of Gaza City. The mosque was 150 metres from the home of Mahmoud Mattar, who was 14 at the time. Having run to the scene of the attack, Mahmoud was present when two further strikes hit the area, killing two 15 year old boys, including one of Mahmoud’s school friends. Mahmoud was thrown unconscious and suffered severe burns and shrapnel wounds. He has been left totally blind as a result.

Mahmoud tells of the changes in his life since the attack: “I used to go by myself to the sea. I was independent. Now I need someone to go with me everywhere I go. I go out maybe once every two or three months, I spend my days inside.” Mahmoud’s self awareness of his injuries means he is now afraid to go out and be amongst people. “I don’t want to go out due to the comments I get from children. Anytime I do I cover my face with my clothes and dark glasses”, says Mahmoud. “The glasses broke yesterday.”

His isolation has left him with a bleak outlook on life. “It would be great if someone could take me to the dessert and leave me there, that way I wouldn’t have to see people.”

The emotional and physical scars of 7 January 2009 have taken their toll on Mahmoud. Keeping his head lowered into his chest and pausing to catch his breath as a result of breathing problems related to transplanted bone matter in his nose, Mahmoud says he is not the young man who spoke with such optimism for the future, in spite of his injuries, three years ago. “When I was in Egypt for medical treatment and when I got back to Gaza everything was calm and people were so supportive of me. But things changed, people started fighting and it’s always noisy. The change you see is out of my hands.”

Mahmoud has been left anxious and short tempered. “I have become very nervous since the attack. If someone is kidding with me I will try to hit them with anything at hand,” says Mahmoud. His anger has resulted in problems in school, for which he was suspended for a year. “As a result of my rushed reaction to incidents there are problems between me and the teachers as well as other students.”

Mahmoud has also had to adapt to the new challenges he faces, including learning brail, which took him a year of dedicated study.  Mahmoud was in Grade 9 at the time of the attack three years ago, he is now in Grade 10.

Mahmoud’s anxiety complicates his family life with his parents and siblings as well as his school life. “Mahmoud is a good guy,” says his father Hani, “but he can be problematic, including being violent with me. But I understand, I am patient with him.” His mother Randa, 38 adds; “he can be very destructive, including taking his anger out physically on the home or his little brother.”

Speaking of the future, Mahmoud says: “before the attack I played lots of sport and I had wanted to be a PE teacher or to open a sports club. But all these hopes are destroyed. Now my only wish is to leave my formal education and focus on my religion and learn the Koran”.

Mahmoud hopes to eventually receive surgery to clear his breathing, as well as reconstructive plastic surgery, which he says has been promised to him by many charity organisations, all of whom have failed to deliver; “If I could get the surgery I would be more comfortable amongst people.”

Like any young man, he also has dreams to be married, but his parents say there is no room in the house for another young family.

Mahmoud is dismissive regarding the prospect of justice before Israeli courts. “I don’t expect the case to be successful. The Israeli’s are liars; they attack children and are careless in what they target.”

PCHR submitted a criminal complaint to the Israeli authorities on behalf of Mahmoud Mattar on 30 December 2009. To-date, no response has been received.