“The second of January is no different from any other day. Every day and every minute feels like the moment when I lost my sons. In everything there is a memory of them. I miss them all the time.” 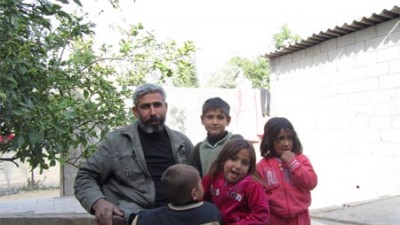 On 2 January 2009 at around 14:30 an Israeli drone fired a missile at an open area in Qarara village, close to Khan Yunis. The missile struck and killed two brothers, Mohammed (12) and Abed Rabbo (9) al-Astal, and their cousin, Abdul Sattar Walid al-Astal (11) while they were playing and eating sugar canes in the land.

“I was at home when I heard an explosion that was close to our area. An Israeli drone was flying in the sky above us at that moment.” Eyad al-Astal recalls. “Approximately ten minutes later, my brother Ibrahim (28) came to my house and told me that my two sons and their cousin were killed by an Israeli shell. I rapidly left the house and headed to the scene about 250 meters west of my house. There I saw a deep hole. Traces of blood and fragments of flesh were still there.”

Three years have passed since Eyad lost his two sons but he still carries vivid memories with him. “Every day and every minute feels like the moment when I lost my sons. In everything there is a memory of them. I miss them all the time.”

Eyad tries to describe what the life of his family is like without Mohammed and Abed Rabbo: “Our lives have been very difficult since they were killed. Every time I see another boy their age, I remember my sons. I still cannot look at their photos, it is too painful.” He says; “I always feel like crying but I try not to. My wife, Jawaher, cries everyday but tries to hide her tears from me. She does not want to add salt to my wounds. My wife always wants to go to our sons’ graves with her mother, but I don’t. I only went once and don’t want to go again. I can’t face the sight of their graves.”

Besides Mohammed and Abed Rabbo, Eyad and his wife have five daughters and two sons. Mohammed and Abed Rabbo were the oldest children and their siblings were either very young or not born yet at the time of their death. The youngest child was born one and a half years after the war and will have no memories at all. “When the children ask us where their brothers are we tell them that they were killed, martyred, and are in heaven now”, says Eyad.

The memory of his sons is at the tip of Eyad’s tongue. “My son Khaled looks exactly like his brother Mohammed and I often find myself saying ‘Mohammed!’ when I actually mean to call Khaled.” In order to keep going, Eyad tries to stay busy all the time, finding some distraction by meeting people and working as a mason.

Since the death of his sons Eyad is tormented by worries and fears for the safety of his other children. Before the death of Mohammed and Abed Rabbo he allowed his children to go anywhere at anytime. Even when there were explosions and shooting was heard in the area. After the incident he became very afraid for his children and he wants to keep them inside. “I am afraid that anything would happen to them, especially for my son Khaled, who is now in the first grade. From the moment he leaves the house I worry that something could happen to him. Every day he walks to school, which is 1 kilometer away from our home. I know education is important, otherwise I would forbid him to go, out of my fear.”

The children themselves are aware that their brothers were killed by a drone: the same type of drone they often hear and see flying above themselves. Eyad explains that “when they hear a drone they are too afraid to go outside. ‘The drone will bomb me if I go out’, is what they say.”

The area where Mohammed and Abed Rabbo were killed was an open area approximately three kilometres away from the border with Israel. “The children were used to playing in that area. Our piece of land is close to it. It is an agricultural residential area, far from any hostilities,” Eyad explains.

Eyad is sceptical about the future, given the continuing impunity. “The Israelis disregard our rights. They kill our children and bulldoze our lands and no one will hold them accountable,” he says. “I expect the Israeli court to reject our complaint. I can even imagine them killing me together with my other children. However, I want to hope that the complaint would have some result.”

PCHR submitted a criminal complaint to the Israeli authorities on behalf of the al-Astal family on 23 June 2009. To-date, no response has been received.