“Naser used to help the children with their school work, especially English and mathematics. Now that is my duty. Nothing can compensate me for the loss of my husband. He was always very tender, understanding and calm.” 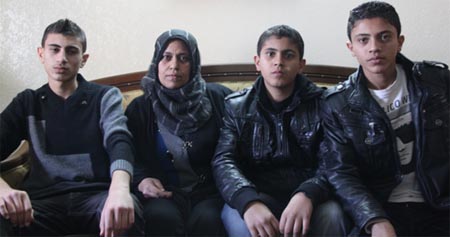 On 15 January 2009, shortly after 7:00, the Israeli army fired a tank shell and live ammunition at Naser al-Nadeem and his two sons, Bashar (17) and Firas (15), who were fleeing their home in the Tal al-Hawa neighbourhood of Gaza City. The two boys sustained moderate injuries while their father was severely injured. After 9 months of intensive medical treatment in Egypt and Gaza, Naser al-Nadeem eventually succumbed to his wounds. He was 44. Naser’s wife, Majda al-Nadeem (45), is now a single parent of three sons, Mohanned (19), Bashar (17), Firas (15), and two daughters, Dima (14) and Tala (9).

“What keeps me going are my children, my children only. I am originally from Damascus and met their father when he was studying there. We married in 1990 and I moved to Gaza with him. I always think to return to Damascus to go and live with my family, but I know that it is better for my children to be here in Gaza. This is their home. I am doing whatever I can to protect them,” says Majda as she smiles at her sons.

All the responsibilities of the household are now on Majda’s shoulders, both with respect to caring for the children and financially. “Naser used to help the children with their school work, especially English and mathematics. Now that is my duty. Nothing can compensate me for the loss of my husband. He was always very tender, understanding and calm.”

Majda explains how she struggles to provide for the most basic needs since Naser died. “My husband used to have an engineering company with a partner and we used to have a good life. Now everything has changed. I am always thinking of how I can provide for my children; how will I bring food, pay for school, electricity, water, everything? I have a lot of pressure on me and it affects me psychologically. We received some payments from the Palestinian Engineers Union and charity organizations but it is not enough or infinite. My family in Syria also tries to help us out financially. They sent us money to repair our house after the war. The bathroom, kitchen, and sewerage were destroyed and there were smoke marks everywhere. Over the past three years our financial situation has gotten worse. A few days ago our electricity was cut off because we cannot pay for the bill.”

The children have difficulties in comprehending the changed financial situation. Majda says: “they want to have what the other children have, but I cannot provide it. They also had to leave their [private] school and change to a public school. It has been very difficult for them to adapt to these changes. They are not convinced that I cannot provide them with everything they want.”

The physical injuries Bashar and Firas sustained in the attack still mark their daily lives. Firas’ right knee was shattered by a bullet. His right leg is shorter as a result and does not bend. Majda explains: “last year doctors placed platinum inside his knee. Now Firas has to wait until he is an adult. Then doctors will check what another surgery can do. But they also said it will never become the way it used to be.” Firas says: “I used to play karate with Bashar but I can’t do that anymore. I can’t really run either. Now I play ping pong.”

Bashar had shrapnel wounds in his left leg and right arm, and back. His leg is deformed and sometimes he has pain caused by infections and muscle damage. “Bashar is a very sporting boy. He used to do karate but he changed to gymnastics because of his injuries. Despite his injury, he insists on continuing his sports activities,” says his mother.

Because of their injuries Bashar and Firas were not able to go back to school until the following semester. Majda called the Ministry of Education and told them that they had to provide the boys with home schooling; “teachers came to teach mathematics, Arabic and English at home, and the boys managed to end their school year with success.”

Despite their optimistic and brave outlook on life, Majda and her children carry with them the psychological scars of the offensive. “The war did change my children. It was a very difficult experience, even for us as adults,” she says. “When we hear explosions we feel fear and remember the war and the attack. If I am afraid, then how must my children be feeling? In the year after his father was killed, Firas would wake up at night and scream ‘I want my father’. Now he is older and understands that his father will never come back. The school performances of Bashar and Firas have been affected too. It is getting better, but nothing is as it was before the war. Firas is also held back by his medical treatment.”

“We are in need of psychological support,” says Majda. “But the people working in this field only visited us for their own interests; taking photos and videos, for the benefit of their organization only.” Bashar adds: “once, a psychological worker came to talk with me but I couldn’t stay with her. She was the one who needed help. I told her that and then left the room.” Majda says: “the only organization I really respect is MSF. The day after the children returned home from the hospital they visited us and kept coming to our house for one year, until the wounds of my children were healed.”

When speaking about her outlook on the future, Majda says “I don’t have a clear picture of what it will be like. What I am sure about is that I cannot guarantee a nice future for my children. But I am trying to teach my children that education is very important for their future and convince them to do well in school.”

PCHR submitted a criminal complaint to the Israeli authorities on behalf of the al-Nadeem family on 23 June 2009. To-date, no response has been received.