9 December 2011 | Notes from Behind the Blockade 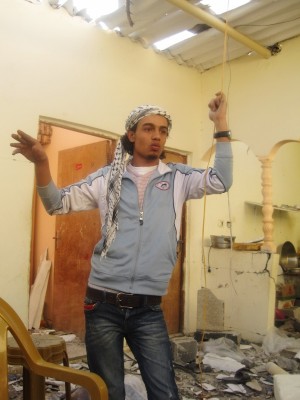 Midhad El Zalaan in his home after Israel’s bombing (Photo: Radhika Sainath, Notes from Behind the Blockade) – Click here for more images

“This is the occupation,” a neighbor mumbled as we stepped into what remained of twenty-year-old Migdad El Zalaan’s cement-block home in the north of Gaza City this afternoon.  The Israeli Air Force dropped the first of three bombs near Zalaan’s home at approximately 2 a.m. this morning killing his uncle, wounding El Zalaan and the rest of his twelve family members, and destroying his home.

In one corner of the living room a baby doll lay on a mattress buried under shards of tin roof.  Cement blocks squashed plastic party hats and red stuffed bears, and  El Zalaan family’s modest possessions lay buried under layers of dust and rubble.  El Zalaan was on his computer right before Israel attacked.

“After the Israelis dropped the first bomb, I took my family and left my home,” explained El Zalaan, periodically looking up at the sky, where the ceiling once was. “Then the second bomb dropped and I went to my uncle’s home to find out if they were okay. My uncle’s wife [Saada El Zalaan] called me from under the rubble. She was holding her baby, I took the baby and then Israel dropped the third bomb.”  El Zalaan then helped his aunt out of her house despite her pleas to get her son out and leave her.

“I kept digging, looking for my uncle, then I found him, buried, but still breathing. He told me ‘take care of my family, take care of my wife and my children’ and then he died in my arms.”  Bahjat El Zalaan was 33-years-old and the father of 5 when he died.

El Zalaan described how during the bombing he was screaming and pulling his hair out, and how he was trying to protect his mother, father, grandmother and siblings from the shrapnel by holding them in his arms. “I got rubble in my leg and back,” he explained, wincing in pain throughout the interview.

He took his family to Al Shifa hospital in Gaza City. Two of his siblings, ages 8 and 10, remain in critical condition.  Israel had destroyed the roof of his home before, during Operation Cast Lead in 2008-2009.  On the outside of the home, a small plaque hung near the broken window, “This shelter was repaired by UNRWA through a generous fund from the Federal Republic of Germany.”

Before leaving, El Zalaan asked if he could take a photograph with us and his cousin, who snapped a photo on his cell phone. As we left I asked him if he worked, and he said no, “we stay at home because there’s no work.”