New
Home / Reports / Shu’fat: Forced to pay taxes from behind a checkpoint and wall

Shu’fat: Forced to pay taxes from behind a checkpoint and wall

On December 18, 2011 residents of Shu’fat and activists protested against the separation wall in front of the new checkpoint. A certain loss of demonstrators was noted, since thirty-five organizers were arrested yesterday by Israeli policemen in their homes in the Shu’fat refugee camp in the middle of the night. 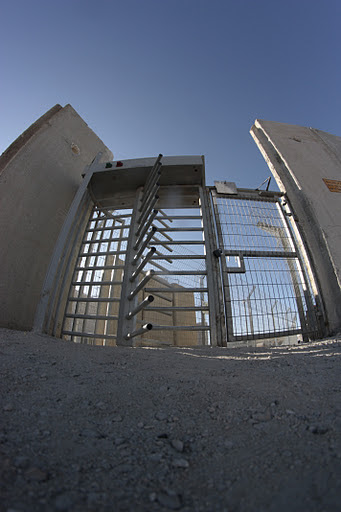 The residents of Shu’fat are Israeli citizens. However, they cannot enjoy the privileges a citizenship normally includes. While the streets in the illegal settlement of Pisgat Ze’ev on the other side of the wall are clean and the municipal services are working, the Shu’fat streets are dirty and waste collection does not exist. Houses taller than two stories are illegal in East Jerusalem, so most houses here have demolition orders.

“All people in Shu’fat must pay taxes to Israel, and still the streets look like a third world country,” one of the demonstrators says.

“They are taking from the poor and give it to the wealthy,” another demonstrator says.

Shu’fat is a neighborhood in the north-east of Jerusalem, though separated from the rest of the city by the eight meters high concrete separation wall. The Palestinian population of 50,000 live more or less imprisoned in the neighborhood, forced to pass through a military checkpoint to reach the rest of Jerusalem. The checkpoint, comprising an observation tower, five stations for armed soldiers to search the cars, and the most recent surveillance technology, was inaugurated last week.

Starting on December 23, there will be weekly demonstrations in Shu’fat after the Friday prayer.

“We will come here to protest every week until this wall has fallen,” promises Jeff Halper from the Israeli Committee Against House Demolitions.

Jenna Bereld and Samar are volunteers with International Solidarity Movement (names have been changed).