Peaceful protesters came face to face with Israeli Occupation Forces (IOF) in Qalandia on Friday before soldiers began to fire tear gas and rubber-coated steel bullets at the civilian group including children, women, and elders. Qalandia village is protesting the construction of the apartheid wall that will cut through their land.

Following the Friday prayer, a procession marched down a dirt path flattened by Israeli bulldozers to a fenced in area where the bulldozers were parked. Two jeeps full of soldiers were quick to arrive and met the march at the fence. 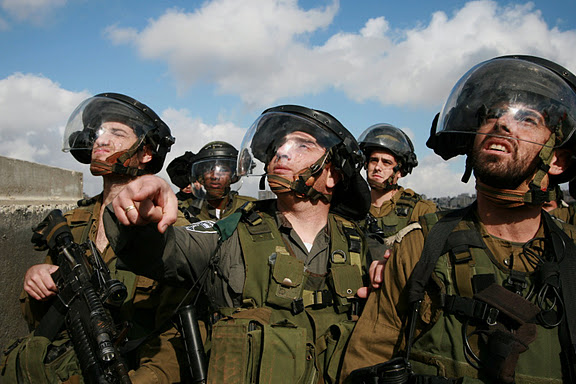 “We resist with peace, as we learned from Bil’in!” chanted the demonstration, among other slogans that criticized results of Israel’s occupation such as the wall. “We are here to resist against the settlements and the wall that steal our land and divide us,” said one of the protest leaders. The procession was joined by activists from Israel, France, America, Canada, and Switzerland.

Although protesters were peacefully chanting, and not advancing, the Israeli military began showing aggressive movements such as pointing guns directly at protesters and pulling out tear gas and sound bombs, hinting at the assault to come. Some soldiers also began to snap photographs of protesters’ faces, despite that they had not committed any crime.

A protester hung the Palestinian flag onto the fence surrounding the bulldozers and the flag easily stuck onto the barbed wire. At this point, a couple IOF soldiers became enraged and began to push and strike protesters, including at least three women. Chaos broke out as the IOF unleashed sound bombs, causing demonstrators to try to distance themselves from soldiers. Before people could get away, tear gas began to fly through the air. Soldiers continued to shoot tear gas at the people: a procession including many women, children, and elders who were visibly unarmed and had not committed any crime.

The cloudy white sky made the high-velocity tear gas canisters almost impossible to see until they landed among the crowd – an incredibly dangerous situation to fire in, which could have ended lethally as was the case in An Nabi Saleh when Mustafa Tamimi was killed after being shot in the head.

Despite the obvious danger of facing these weapons, protesters continued to attempt to re-gather themselves and continue chanting for almost one hour. Young boys stood unabashedly in the front lines, dodging rubber-coated bullets and gas.

Eventually, protest leaders called the group back to the village and the demonstration ended.

Rana H. is a volunteer with International Solidarity Movement.