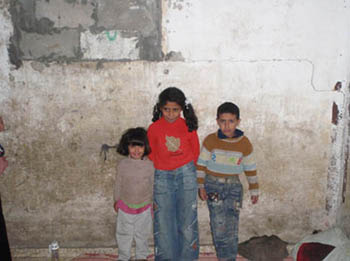 Muhammed Salman Abu Rashad, 45, Amna Abu Rashad, 31, and their nine children live in the Jabalia refugee camp, one of the most densely populated areas on earth. The family represent just 11 of the 1.1 million refugees who make up the vast majority of Gaza’s population of approximately 1.7 million people.

According to the United Nations Relief and Works Agency (UNRWA), Jabalia is the largest of Gaza’s eight refugee camps and is home to around 110,000 registered refugees in an area of only 1.4 square kilometres; unsurprisingly, the camp is infamous  for its overcrowding.  Israel’s illegal closure policy, first used to isolate the Gaza Strip in 1991, has been particularly devastating on the residents of Jabalia camp, who, like Muhammed Abu Rashad, previously relied on jobs within Israel to support their families. Since the beginning of the complete closure of Gaza in 2007, the now-unemployed residents have been forced to rely on UNRWA aid to survive.

The Abu Rashad’s home, consisting largely of a 3 meter by 3 meter room, is typical of many homes in Jabalia camp. A single room acts as the sleeping, living, studying and eating area for all eleven family members. With winter approaching, it is obvious that the house, which displays long winding cracks along its walls and an open doorway where there should be a functioning door, is entirely inadequate for the couple and their nine children, with a tenth on the way. When the rain comes it flows into the house and onto their blankets, and despite the fact it is a crisp dry day outside, the damp in the room is particularly noticeable. Muhammad is quick to point out that the conditions would be better in prison: “it is not a home but a cemetery”.

The crowding affect’s all aspects of family life, but for the couple’s 9 children the effect is crippling. A majority of the family’s children study during the evening shift in the local UNRWA school, which is forced to run double shifts to facilitate all the camp’s students. When the children return home it is dark and, given the constant power cuts, lack of space, and loud noise from electrical generators the children are unable to study. As a result, two of the Abu Rashad children have failed a year in school and been kept back.

With a lack of space to play – either in the home or in the tight, rubbish strewn, alleyways outside – the children have little physical or emotional space and tend to lash out against each other as a result. The boys resort to violence against their younger siblings and Muhammed tells me that his two daughters are unable “to behave like young girls”, instead imitating their brothers violence in an attempt to “hold their own”. Muhammed himself regrets lashing out at his children when they misbehave, saying that the stress of living in such close quarters leaves him anxious and prone to outbursts.

The crowding has repercussions not only on the family’s mental health but also their physical health. Greeting the children it is obvious they are all suffering from colds and flu. Muhammed says that “when one child comes down with an illness, with no space to isolate and treat them, the rest of the children are all rapidly infected”. Given the constant damp and cold getting the children well again once they become sick is no easy task.

While the crowding has left the family at crisis point, the situation is only getting worse. The children are currently young, the eldest being 15, but as they grow older the tiny room will become progressively more cramped. The eldest daughter Sundus, 10, will soon be too old to sleep next to her brothers. Muhammad tells us that with the neighbours building on top of their current houses in an attempt to alleviate their own crowding problems, the sun will soon be blocked entirely from the already dank family home. The result, according to Muhammad, will be “the families’ destruction”. 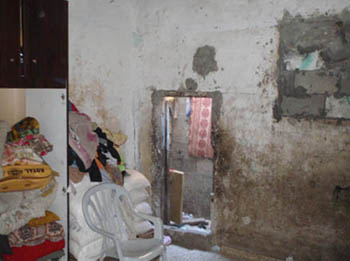 The Palestinian refugee crisis is one of the largest and most longstanding refugee problems in the world; today approximately one in four of the entire world’s refugee’s are Palestinian. The rights of Palestinian refugees, and in particular the ‘right of return’, are protected in numerous UN Resolutions, including UN Security Council Resolution 194. However, for as long as the international community refuses to enforce international law, these resolutions will continue to bear little relevance for the Gaza Strip’s refugees, whose fundamental human rights continue to be systematically denied.