The Israeli military fired tear gas canisters directly at demonstrators in Kufr Qaddoum today in an aggressive response to the weekly protest against the closure of the main road linking the village with Nablus.  Many people suffered from severe gas inhalation.

After midday prayers, over 200 people marched to the edge of Kufr Qaddoum where several people made speeches calling for the road to be re-opened to the village, including officials from the Palestinian Authority and the Chief of the Palestinian District Coordinators Office.  The route to the road was blocked by around 10 Israeli soldiers, supported by armoured vehicles and soldiers on the hill overlooking the village. 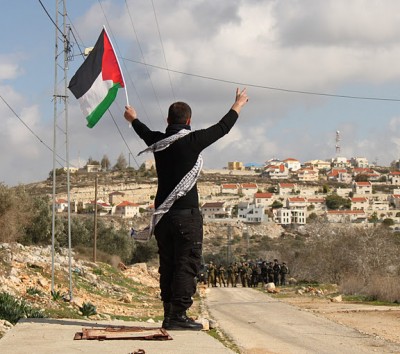 Many people returned to Kufr Qaddoum after the speeches, however some Palestinian youths threw stones at the Israeli military, who responded by mounting an aggressive incursion inside the village, firing tear gas canisters directly at protesters and into houses and gardens lining the village’s main street.

Although it is permissible to fire tear gas canisters in an arc to disperse demonstrations, it is forbidden to use them as weapons by firing them directly at protesters. Firing tear gas canisters directly at protesters and at close range turns the canisters into a missile that can maim and endanger life.  According to B’Tselem, an Israeli human rights organization, “Firing of this kind has already resulted in injuries, some grave, to dozens of Palestinians and Israeli and foreign citizens”.  A Palestinian man was seriously injured at the weekly demonstration in Nabi Saleh today, after reportedly being hit in the face by a tear gas canister fired by Israeli military forces at close range.

The main road linking Kufr Qaddoum to Nablus passes by Qadumim, an illegal Israeli settlement, and was closed to the village by the Israeli military in 2003.  The closure of the road has doubled the length of time that it takes villagers to travel to Nablus.  A report published in September by the Palestinian Ministry of National Economy estimated that restrictions on movement imposed by Israeli forces costs the Palestinian economy $184m a year.

After their appeal to re-open the road failed in the Israeli courts, the village began weekly protests on 1 July 2011.  Since then the response from the Israeli military has grown increasingly violent, mounting incursions deep into the village.  Abu Musub, President of Kufr Qaddoum’s community centre, said that “Every week they fire more gas – they want to stop the demonstrations but we will continue until the open the road.”

According to Abu Musub, the Israeli military enters Kufr Qaddoum every night, often detonating loud sound bombs in the village’s streets.  They have also arrested many of the village’s men in connection with the protests.  Four men were arrested by the Israeli military on 29 November 2011 – Osama Bram, 22, Abdallah Jumu, 23, Refit Bram, 21, and Abdel Juma, 23.  The arrests were probably made in connection with the demonstrations, however they have been denied contact with their families or a lawyer so no information is available at present.  Abu Musub claims that the Israeli military caused severe damage to the Abdel Juma’s house during his arrest; damaging carpets, smashing furniture and ripping open bags containing food.

Abu Musub claimed that there are 20-21 people from the village in Israeli custody – eight of whom have been arrested in connection with the weekly protest.