Today, in the town of Qalandia, north of Ramallah, Palestinian and international solidarity activists tried to stop the illegal construction of the separation wall. The Israeli government issued a map that shows the new tracing of the wall. According to this map the wall would take more Palestinian land.

After several meetings with members of the Qalandia’s community, organizers, and PA members, they decided to organize an action today in order to stop the construction of the wall.

About 25 palestinians and two ISM volunteers went to the construction site to try to stop the bulldozers. They stopped the work of the builders. Less than five minutes later, two border police cars arrived. The policemen asked the demonstrators to leave within five minutes. Two minutes later they started to violently push Palestinians away from the road. At least 5 palestinians who were trying to resist the violent policemen were heavily pepper sprayed. The border policemen also used many sounds bombs which they threw at the demonstrators. 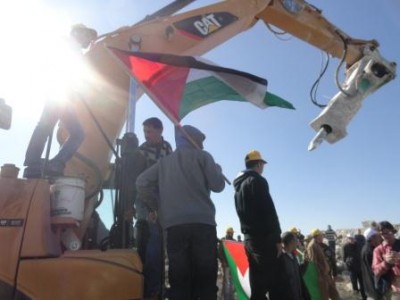 One ISM volunteer, Wahed, who was sitting in front of the bulldozer was sprayed with a significant amount of pepper spray in the face. He was badly injured, his face and eyes were burning. An ambulance took him to the hospital. It was only two hours later that he started feeling better.

The protest lasted 45 minutes. The Palestinians were forced to leave by the border police.

The International Court of Justice stated in 2004 in an important advisory opinion, that “the consequences of the construction of a wall in the occupied Palestinian territory”  and its construction is illegal under the international conventions that Israel ratified. Indeed, by building a wall, the Israeli government is violating some of the basic Human rights to which it signed to.