Two weeks after the killing of Mustafa Tamimi during a demonstration in the village, an Israeli sniper shot a protester with live 0.22″ caliber ammunition, banned for crowd control purposes. 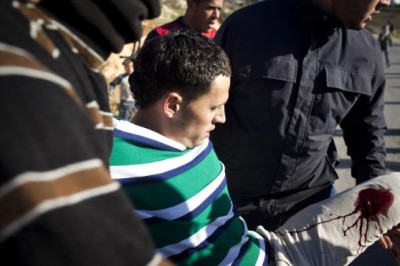 Earlier today, an Israeli military sniper opened fire at demonstrators in the village of Nabi Saleh, injuring one in the thigh. The wounded protester was evacuated by a Red Crescent ambulance to the Salfit hospital. The incident takes place only two weeks after the fatal shooting of Mustafa Tamimi at the very same spot. Additionally, a Palestinian journalist was injured in his leg by a tear-gas projectile shot directly at him, and two Israeli protesters were arrested.

The protester was hit by 0.22″ caliber munitions, which military regulations forbid using in the dispersal of demonstrations. Late in 2001, Judge Advocate General, Menachem Finkelstein, reclassified 0.22” munitions as live ammunition, and specifically forbade its use as a crowd control means. The reclassification was decided upon following numerous deaths of Palestinian demonstrators, mostly children.

Despite this fact, the Israeli military resumed using the 0.22” munitions to disperse demonstrations in the West Bank in the wake of Operation Cast Lead. Since then at least two Palestinian demonstrators have been killed by 0.22” fire:

Following the death of Aqel Srour, JAG Brig. Gen. Avichai Mandelblit reasserted that 0.22” munitions “are not classified by the IDF as means for dispersing demonstrations or public disturbances. The rules for use of these means in Judea and Samaria are stringent, and comparable to the rules for opening fire with ‘live’ ammunition.”

Contrary to the army’s official position, permissive use of 0.22” munitions against demonstrators continues in non life-threatening situations.

Background
Late in 2009, settlers began gradually taking over Ein al-Qaws (the Bow Spring), which rests on lands belonging to Bashir Tamimi, the head of the Nabi Saleh village council. The settlers, abetted by the army, erected a shed over the spring, renamed it Maayan Meir, after a late settler, and began driving away Palestinians who came to use the spring by force – at times throwing stones or even pointing guns at them, threatening to shoot.