Jordan Valley: threat of imminent demolition hangs over the village of Al Hadidiya

Before the 1967 Israeli occupation of the West Bank, Al Hadidiya, near the Jordan Valley villages of Tubas and Jiftlik, was inhabited by over 100 families. Today, only 14 families remain. Since 1967, the village has been demolished four times, and over 3000 dunums of land, necessary for shepherding and grazing of animals, has been stolen by the nearby settlements of Ro’I and Beqa’ot. 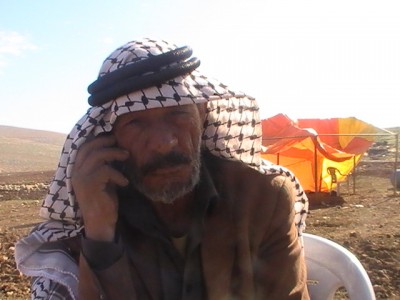 On November 10, the community received nine new demolition orders that target 17 structures and will affect 72 people. As lawyers struggle to legally postpone or annul the orders, the people of Al Hadidiya wait in uncertainty and fear.

Abu Sacher is a shepherd whose makeshift tents are slated for demolition. Before 1967, the year of the first demolition of Al-Hadidiye, he, like all other villagers, lived in a sprawling stone house. “Do the Americans, the French or the British,” he protested, “think that the children in Palestine and the children in their countries are equally valuable? Do they want to live under occupation? America was under British occupation and they didn’t like that!”

Most villagers have relocated to nearby villages such as Tubas, Jiftlik, or Nablus. Others, however, like Abu Sacher, whose home has been demolished six times, remain steadfast on their land. “I will not leave my home”, he says. “Even if the entire population of America comes and settles here, I will still be here!”

In June 2011, Israeli military carried out two sets of demolitions in Al-Hadidiya, demolishing, according to the figures of Stop the Wall, 33 structures, leaving 37 residents without homes, and undermining the livelihood of a further 15. 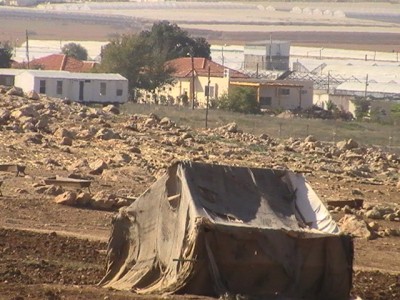 The close proximity to Al Hadidiya and the nearby Ro'l settlement

A week after the November demolition orders inspired the Stop the Wall campaign to spearhead a letter-writing campaign, diplomats from 7 European representative offices visited Al Hadidiya to show solidarity. On November 17, a day before the scheduled demolition, Al Hadidiya’s legal defense team entered court to ask permission for the construction of homes. The Palestinian-owned land of Al-Hadidiya has since 1970 been declared an Israeli Area C military zone, despite the absence of any noticeable military activity.

As a consequence of policies designed to ethnically cleanse the Palestinian Bedouin from Area C of the Jordan Valley, the people of Al Hadidiya lack direct access to education, health care, electricity and water resources. Because villagers are barred from digging water wells or using the Mekorot water pipes that run under their feet, they cannot pursue their traditional agricultural lifestyle and must rear animals, a task made more difficult as more dunums of grazing land are stolen by settlements. “My family were peasants”, living off the land in a stone house, explains Abu Sacher, “but we have been made to live like Bedouin”, dwelling in tents as shepherds. The nearby settlements of Ro’I and Beqa’ot, on the other hand, enjoy an abundance of land and water, government subsidies, high-tech methods, and European markets for their agricultural industry.

Ben Lorber is a volunteer with International Solidarity Movement.