New
Home / Photo Story / In Photos: The devastation of the Price Tag campaign in Bruqin

In Photos: The devastation of the Price Tag campaign in Bruqin

The smell of fire and sorrow was evident in Bruqin today, which is located to the west of Salfit in the northern area of the West Bank.  Even eight hours later  the feeling of loss populated the air. At approximately 2:30 AM a group of settlers entered the village and set fire to a mosque, a bulldozer, and a car. 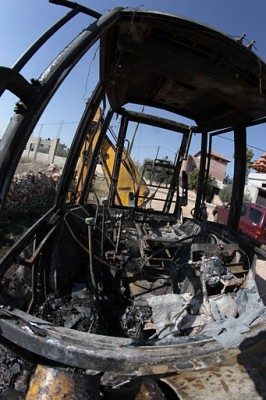 The toll on Bruqin – Click here for more images

Israeli police and soldiers documented the attack, but claimed that they did not know who committed it. Many people are skeptical due to the fact that the roads coming into Bruqin are secured and monitored by soldiers and cameras. This was another attack to make life miserable for the Bruqin people. It has been targeted by settlers and Israeli soldiers many times, so the people are certain that this attack will not be the last.

The mosque was saved by the villagers. They came out in time to stop the fire as it reached the front door. The settlers did not leave the mosque in flames, but also marked it with words in Hebrew showing their loyalty to the illegal Ariel settlement. Unfortunately, Bruqin is surrounded by four major illegal settlements.

The criminals managed to completely destroy a brand new bulldozer. The owner, Ali Sabar, purchased the bulldozer last week with a down payment of 19,000 NIS.  Ali will spend the next 12 months trying to pay the remaining balance of 60,000 NIS. This violent act not only violated the Sabar family’s human rights, but has devastated any hope of prosperity for them. Ali stated that insurance will not cover the damages because “this is an attack and not an accident.”

The state of the Samara family’s car is immobile just like Ali’s bulldozer. The car is totally useless, just another casualty of the Israeli Occupation. The only thing that was not ruined in the car was a copy of the Quran.

Bruqin is in Israeli controlled Area C. Israeli Apartheid laws allow for any construction in Area C to be demolished if the Israeli Army orders it. The odds are against the people of Bruqin, yet hope was still present today.  The Mosque still continued the call for prayer, and although they could not pray inside they still gathered together with hope.

Many commented that the Quran was only spared due to the binding of it, while others will credit their faith. Nonetheless, the Bruqin people are using this to increase their hope and strengthen their resilience.