Over two weeks have passed since the El Gelwe family’s home was demolished. They remain homeless and are currently living in a tent which was provided by Palestinian neighbors in the village of Idna, of the Hebron Governorate. The family’s tent is erected just meters away from the pile of concrete that was once their home.  It undoubtedly represented so much for this family. 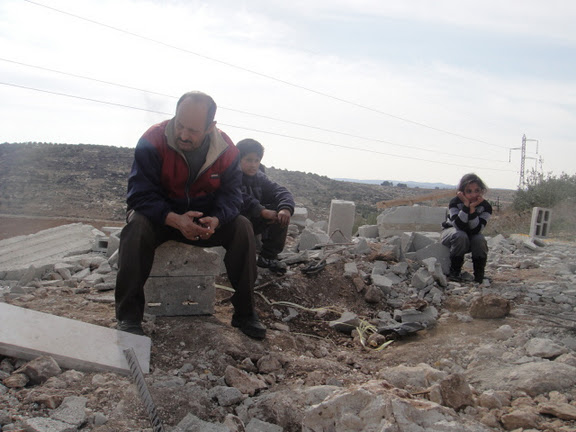 Saving just to be demolished - Click here for more images

The father, Jamel was visually broken as he stated, “Someone saves money their whole life and they come and demolish it.”

This home was the family’s first house and within minutes the Israeli army turned their dreams in rubble.

On the 24th of November the Gelwe family received a visit from the Israeli military “demolition services.”  As is common practice in house demolitions, the Israeli military arrived in the village of Idna at 5:00 in the morning. The family was still asleep and thus in a vulnerable state. They were not given any time to save any of their property. Their house was demolished along with all of their possessions.  Jamel tried to reason with the soldiers to allow them to keep their water well, but that just resulted in the soldier ordering him to move away. The family was forced to watch everything they ownedcrumble to the ground. Now they have no clothing, food, or water and with no justifiable reason as to why.

One can only conclude that the timing of these raids is a strategy used by the Israeli military to create as much terror as possible, in addition to the destruction. The family never received a demolition notice: this visit was a complete surprise to them. After living in the house for a few months they were notified this past May to stop building their house. Not only was the house already built, but the land is in Jamel’s name. The land has been passed down to the Gelwe family for generations. It is the only land they have left after the Israeli Army stole 47 dunums of their land to build the Apartheid Wall.

During a recent visit to the family it was clear to the ISM activists that this experience has caused significant emotional trauma to the family. The children were obviously distraught and scared of their bleak future. As with many Palestinian families there is little or no regular income

Just to ensure that the family adequately suffered from the experience of having their home destroyed, the Israeli military charged the family 2,500 NIS for their “demolition services’. If the family fails to pay, their fifteen year old son will be imprisoned indefinitely until they pay the fine. Not only were the Gelwe’s human rights violated, but they must pay for this abuse.

Over the last few weeks there appears to have been a significant increase in the number of house demolition orders being served and homes being demolished. The reasons for this increase are currently unclear, but one thing is certain: illegally destroying the homes of Palestinian family’s in the West Bank is not about the security of Israeli citizens. With the onset of the winter season it is inevitable that the suffering of the homeless will be more severe during this period.

Now the family is left with nothing, but they question. “Where are we going to go now?” asked Jamel. “We are thrown into this tent and tomorrow it will rain, then what?” The family of 15 is sleeping outside during the cold winter night for the 20th consecutive day.