Home Demolitions: Child dragged out by his throat

On Monday the 5th of December, in the Azzun district of Qalqiliya, a stone factory was destroyed at 6:00 am. The owner, Hussain Anam, explained to us that the factory was built 3 years ago, but his only demolition notice was when the bulldozer came this morning. The demolition order stated that the building was built without permission. The bulldozer was accompanied by 15 jeeps and 50 soldiers to destroy the property. This factory employed 10 people and now they are asking,”Where will we work today?”

In Arab an Ramadin al Janubi, two houses were destroyed at approximately 7:30 in the morning. The demolition was executed by 50 soldiers using 2 bulldozers. 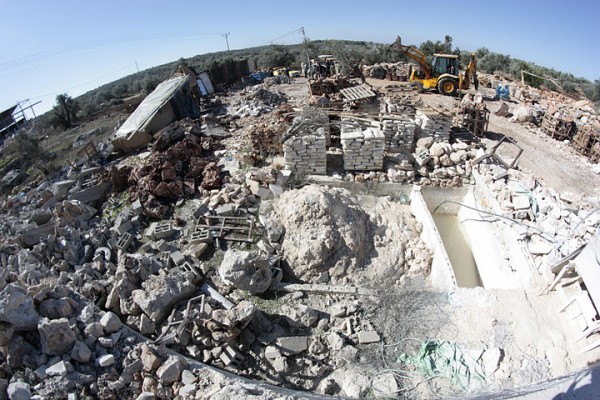 The first home belonged to the Shaour family. The home was built through donations by the 320 residents of the village. And today the Israeli Army forced this family out of their home with violence. One of the children was dragged out of the house by his throat. Their first demolition notice was sent two weeks ago and then another notice three days ago. The evicted family included 8 children and their parents. The only thing that was saved from the home was the grandmother’s medical bed. The grandmother had to watch her son’s home being demolished as she laid in her bed not able to move.

After the first demolition the soldiers continued their efforts to destroy homes. The next on the list was the home of Mohammed and his 5 children. Mohammed originally received a demolition order 10 years ago, and today the Israeli army fulfilled their threats by destroying Mohammed’s house.

He is now asking himself, “Where will I sleep tonight with my children?” All of their possessions including a refrigerator, TV, and sofa lay under the rubble of this 8 by 10 meter squared house.

“All the belongings we cumulated during these 10 years, the family souvenirs, pictures”, Mohammed said as he began to cry. They have lost everything .

In both of these home demolition cases the soldiers did not let the family save the furniture, electronics, or clothes. Now both families have no place to call home.

Sarah is a volunteer with the International Solidarity Movement (name has been changed).