Gaza will not kneel 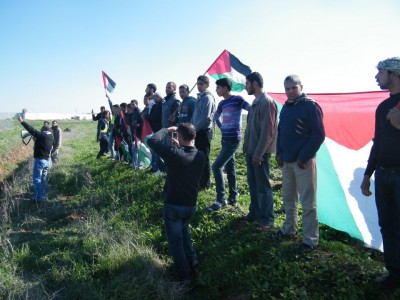 Twenty-three consecutive days of horrendous attacks on the Gaza Strip by the IOF (Israeli Occupation Forces) left more than 1500 Palestinians dead and many more injured.  Most of the victims were women, children and elderly people.

According to the IOF these attacks were intended to deter the Palestinian resistance. These attacks failed completely, we continue to resist.

Three years have passed since what the Israeli entity called “Operation Cast Lead” began on December 27, 2008.  The IOF claimed that they were targeting “Hamas”, but this wasn’t true.   Most of the targets were civilians in their own homes.

We, as a Palestinian people, assert that Hamas is an integral part of the national Palestinian liberation movement and that they are not terrorists as the Israeli propaganda depicts them. We think that each political or popular party has the right to resist the occupation with all available means.

Operation Cast Lead left more than 1500 Gazan dead; most of these victims were women, children, and elderly. Three years have passed, justice is still absent.

On the third anniversary of the Israeli war on Gaza, or the “Gaza Massacre”, we call on human rights NGOs and The International Court of Justice to break their shameful silence and take some “practical” steps along with the “usual “condemnations and statements”. The Israeli occupation will not be deterred from violating human rights unless you “act” by force or you use practical methods, not only “talk”.

In its aggression on Gaza, the IOF used internationally forbidden weapons against civilians and in heavily populated areas.  For example, white phosphorous was used against civilians in Gaza; it burned many people to death in their homes.  The IOF also used white phosphorous against an UNRWA school that had many civilians in it; they were trying to escape from the IOF’s shelling of their homes.  Further, the UNRWA headquarter building was also targeted. These are war crimes. International justice must be served equally to all human beings.  Therefore, we ask you to boycott the Israeli entity in every way.  Economic and cultural boycott are good examples.