Settlers from Avraham Avino  targeted Palestinians in the Old Souq in Hebron during the Saturday market on December 3rd 2011. At approximately 11 AM  Five unmasked settlers, aged around 20-30, threw concrete blocks down from a roof above the Old City at the booths outside of the shops, and at the people passing. The blocks were of considerable size – each weighing around 5-10 kilos. As they were thrown from a height of eight meters, anyone hit would be severely maimed or killed. Some of the blocks became lodged in the roof above the shops while some landed in the street. 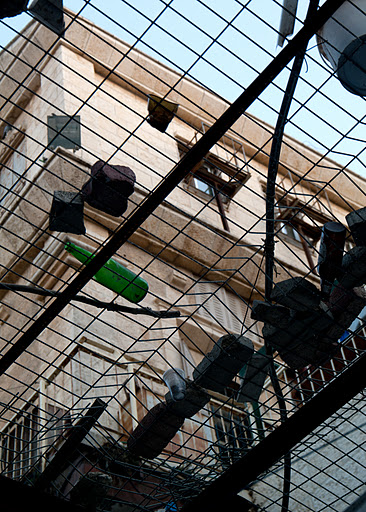 To access the Souq the settlers had to pass over the roofs of several Palestinian families in clear view of the military posts  that are stationed on the rooftops. They were standing next to a military post as they threw the concrete blocks – uninterrupted by the military.“If it was a Palestinian (throwing stones from a roof), he [the soldier] would shoot him!” a shop owner said.

A witness identified two of the settlers as people who had taken part in an attack on Palestinians two years ago when the Eawawy family´s home was burned down. The arson was investigated by the Israeli police, as the Old City is in Israeli controlled H2, but asthe police have failed to take action even though the perpetrators have been identified. The shopkeepers were reluctant to report today´s attack to the police due to the Israeli authority´s failure to investigate settler attacks.

International observers arrived at the area before the military, who arrived after they had been contacted by the Temporary International Presence in the City of Hebron (TIPH). Attacks by settlers who live next to the Old City are frequent and the residents have had to attach netting above shops and streets to protect frequently targeted areas.

Andrew Michaels is a volunteer with the International Solidarity Movement (name has been changed).