Dozens teargased in the village of Bil’in west of Ramallah

9 December 2011 | Friends of Freedom and Justice-Bilin

Dozens were wounded by poison gas suffocation in the weekly march organized by the Popular Committee Against the Wall and Settlements in Bil’in, with the participation of a delegation from Belgium, dozens of Palestinians, and international and Israeli peace activists. 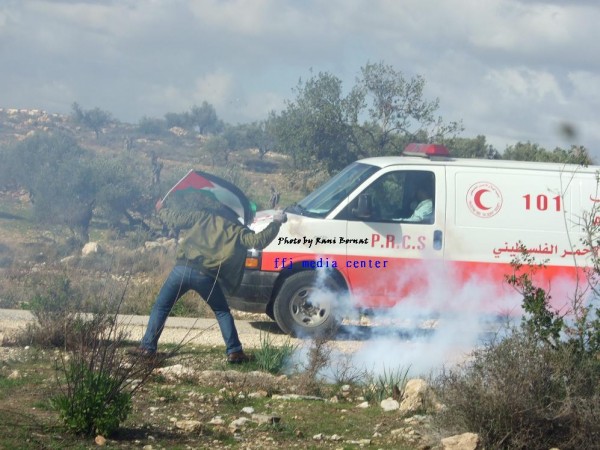 The march began after Friday prayers from the center of the village heading to the land which was liberated five months ago from Israeli occupiers. Participants raised Palestinian flags and banners painted with the image of the imprisoned leader Marwan Barghouti. They chanted national slogans calling for the departure of the occupation and the demolition of the apartheid wall, and also they called on Palestinians to remain faithful and call for freedom for all Palestinian prisoners.

Upon their arrival to the Abu Lemon area, activists removed some of the barbed wire that cuts through the land. Then Israeli soldiers who were situated behind the concrete wall shot rubber coated steel bullets, stun grenades, tear gas canisters, and sprayed skunk water towards the participants, which caused the injury of dozens from severe asphyxia. Ambulance crews treated the wounded in the field, during while some of the participants threw stones at the soldiers.