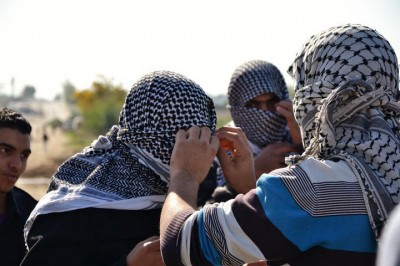 Today, in Beit Hanoun, we marched in remembrance of the beginning of the Intifada.  We gathered near the Beit Hanoun Agricultural College, the same place we have gathered every Tuesday for the last three years.  We were about forty people in all, activists from the Beit Hanoun Local Initiative, the International Solidarity Movement, and people from around Gaza.  Bella Ciao echoed over the loudspeaker, that was our signal to begin marching.  We marched down the road toward the no go zone, the three hundred meter strip of land along Gaza’s border where Israel murders any who dare to enter.  Just as we refuse the occupation, we refuse the no go zone, every Tuesday, we march into the no go zone.  We began to chant, “No to the Occupation”, “from Beit Hanoun to Bil’in we are all resistance”, and “A steadfast people will never be humiliated”.

As we reached the edge of the no go zone, we paused.  Many members of the demonstration wrapped their faces in keffiyehs and empty bottles and sling shots were taken out of bags in honor of the weapons of the First Intifada, the revolution of stones.  We march into the buffer zone, our hearts cheered by the Palestine flag that still flies where we planted it several weeks ago, reminding everyone, that this land isn’t naturally dead, that even if the bulldozers come and destroy everything, as they do every couple of weeks, resistance will always rise up anew.  We stop by a giant piece of rubble that we have painted with a Palestinian flag.  Sabur Zaaneen from the Local Initiative speaks, “this march commemorates the martyrs of the first Intifada, the glorious uprising of stones which began 24 years ago.  The revolution continues, the Intifada and the resistance will continue until the Palestinian dream of an independent state with its capital as Jerusalem and the return refugees is achieved.”  We march back to Beit Hanoun.  Next Tuesday, we will march into the no go zone again if the occupation has not ended by then, but our resistance, will continue every day until the end of occupation and the return of the refugees.