One Palestinian journalist from the  Associated Press was arrested while the Occupation Forces invaded the village of An Nabi Saleh.

Before the beginning of Friday’s traditional protest in An Nabi Saleh, the Occupation Forces placed soldiers at the entrance gate to the village and began searching all cars entering the village, registrating the names of the passengers. Two protesters were hunted for several hundred meters by the Occupation Forces when trying to avoid this checkpoint, escaping a potential arrest. 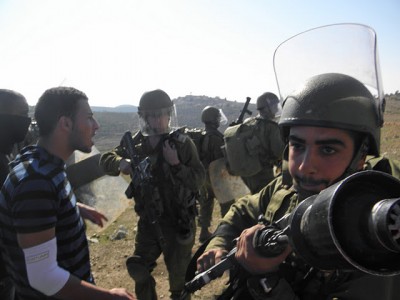 The protest began after the traditional, Muslim noon prayer. While chanting the demonstrators went to the hill in front of the illegal Halamish (Neve Zuf) settlement, located opposite of An Nabi Saleh, which has illegally seized nearly one half of the village’s valuable agricultural land. There they were met by the Occupation Forces who first withdrew but then called for several military jeeps to come bringing papers claiming the area a closed military zone. One Palestinian journalist from AP was arrested by a commanding officer from the border police.

The protesters were targeted by tear gas canisters and rubber coated steel bullets shot directly at them. In the last hours of the protest the Occupation Forces used  the Long Range Acoustic Device (LRAD), created by the American Technology Corporation, which has been popularly referred to as “The Scream” by Palestinians and international activists. The loud sound device has been used in earlier protests of An Nabi Saleh, and is capable of causing disorientation and even blacking out. This is the first appearance it has made since a few months ago when the illegal settlers of Halamish themselves complained of its noise.

Tagged with: An Nabi Saleh Hallamish Settlement The Scream