In a blatant demonstration of the discriminatory policies used by the Israeli authorities when it comes to deal with protesters; out of the 21 persons who were arrested during the demonstration in Nabi Saleh on 16.12.2011, all the Israeli and internationals were released while two Palestinians are still in custody and are accused with ludicrous charges such as assaulting Israeli settler or throwing stones. This is so outrageous when you see how much the Israeli army kept assaulting the unarmed protesters yesterday, showering them with tear gas canisters and sound bombs directly at heads levels. In response the protesters just kept walking, chanting and shouting slogans, waving Palestinian flags and posters with the portraits of Mustafa Tamimi; killed the week before. Stones were thrown towards the “invaders” after they attack the crowd which was marching towards the entrance of the village. 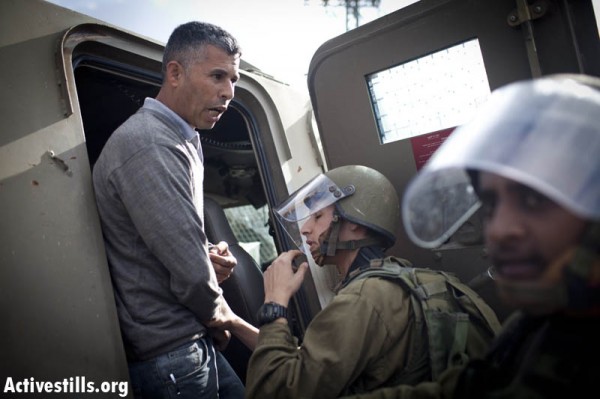 Mohammad Katib from Bi’lin, one of the leaders of the Palestinian popular resistance, arrested when a group of protesters walked towards the entrace of the Halamish settlement during the weekly demonstration in the West Bank village of Nabi Salih, 16.12.2011. Photo by: Oren Ziv/Activestills.org/ 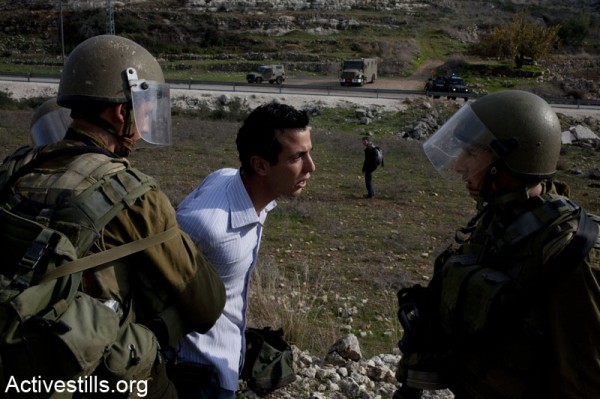 Mohammad Tamimi, a photographer of the village of Nabi Salih, is seen getting arrested by Israeli soldiers when a group of protesters walked towards the village’s confiscated spring during the weekly demonstration in the West Bank village of Nabi Saleh, 16.12.2011. Photo by: Keren Manor/Activestills.org

Both Palestinians who were arrested were unarmed; they were protesting against the occupation and colonization of their lands. Arrests of human rights defenders and Palestinians involved in the popular resistance is no exceptional this is routine practice from the Israeli Occupying forces which this way attempt to curtail any dissent.

This is not an coincidence that they are trying to charge Mohammad Katib, one the main leaders of popular resistance in Palestine. The fact that he is from Bi’lin and was in Nabi Saleh was also significant, it shows that the struggles of these villages are not disconnected. And this is exactly what Israel fears- that the struggles in those villages grow and take the popular resistance to another level.

Mohammad Tamimi from Nabi Saleh was also arrested when he walked towards the Israeli soldiers who were preventing the protesters to reach the village spring which was confiscated two years ago by the settlers. Mohammad is known to be the photographer of the village.

Both were arrested in doing exactly the same thing as the others 19 who were arrested in the same circumstances. Actually the Israeli army should have arrested all of us- the hundreds of protesters who joined this Friday the villagers of Nabi Saleh to raise our voice against the continuing oppression in Palestinians and to honour Mustafa Tamimi, killed in cold blood the week before by an Israeli soldier courageously half hidden in a military jeep. He shot directly at Mustafa’s face from a distance less than 10 meters.

The details about the charges and proceedings against Mohammad Katib and Mohammad Tamimi will be clearer in the next hours and a campaign is now starting to demand their immediate release. If they are arrested and jailed for what they did yesterday, then we should all be.