Participants included representatives of the Fishing and Marine Sports Association and the Palestinian NGO Network (PNGO), as well as Palestinian youth activists from Gaza. 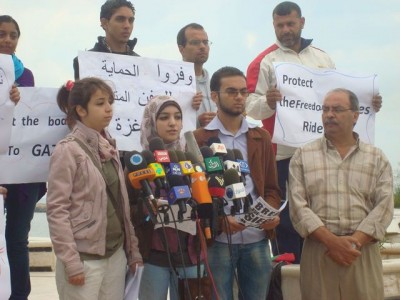 Mahfouz Kabariti, president of the Fishing and Marine Sports Association, which hosted the event, greeted attendees and spoke of Freedom Waves participants. “These brave men and women are challenging the same criminal siege that confronts Palestinian fishermen daily,” he said.

“It’s not only a matter of aid, but is more importantly a statement about the ongoing blockade, as well as the lack of freedom of movement between Palestinian territories and the Palestinian people,” said Jehan Alfarra, a 20-year-old English literature student at Islamic University.

After a brief press conference, attendees launched a boat into the harbor from which they waved Palestinian flags and sang Palestinian national songs like “Unadikum” to symbolically welcome the flotilla to Gaza.

Participants returned to the Seaport Friday afternoon after hearing of Israel’s interception of the flotilla.

“At 2:00, the boats were boarded by Israel in international waters about 48 miles off shore,” announced Hussien Amody, a 19-year-old computer engineering student at Al-Azhar University.

“This is a crime, of course,” he continued. “Why don’t they just open the borders and let supplies enter if they really want us to have them?”