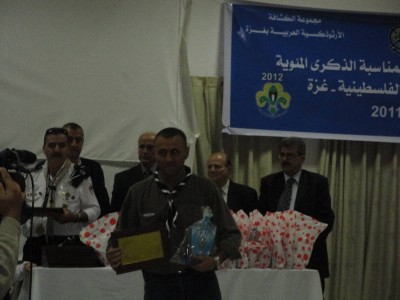 Palestinian Scouts and their families rallied in the Gaza YMCA Friday afternoon to honor former political prisoner Christian Al-Bandak and welcome him to Gaza.

Al-Bandak, who donned a Scout neckerchief to receive a commemorative plaque, is one of 477 prisoners already released by Israel in its ongoing exchange of prisoners with the Palestinian government in Gaza.

After sentencing Al-Bandak to four lifetimes in its occupation prisons in 2003, Israel illegally exiled him to the Gaza Strip from his home in Bethlehem following his release, along with over 160 other West Bank residents.

The only Christian among the released prisoners, he had remained behind in Gaza while most others traveled from it, the West Bank, Israel, or foreign exile to Mecca, Saudi Arabia for the Muslim Hajj.

“People were here of different ages, religions, and parties,” Al-Bandak said after the event. “This illustrates the unity and patriotism of the Palestinian people. My welcome in Gaza has been excellent.”