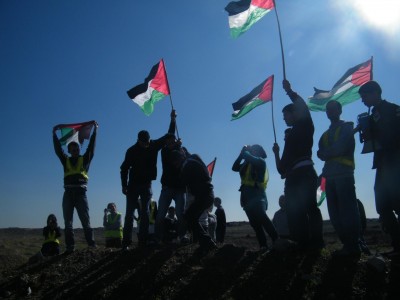 We gathered in the road in front of the Agricultural College of Beit Hanoun, the same place that we gather every week. There were about forty people, members of the Beit Hanoun Local Initiative, the International Solidarity Movement and citizens of Beit Hanoun. Like every week, we planned to march into the no go zone. The chanting started immediately, with more energy than usual. Soon music began to pour from the loudspeakers. The march was to begin.

We walked down the road, into the no go zone. We walked past the flag that we had painted on piece of rubble, past the olive grove that we planted last month, we marched all the way to the flag which we have left to fly over the no go zone. We only enter the no go zone once per week, but we the signs of our presence are always here, the olives the flag. If Israel destroys them, we return them again. The no go zone seems to encapsulate Israel’s attitude toward Palestine, erasure, nothing is left living there, even memory is erased, it becomes truly a land without people. The people who have been left without land are not the Zionists, but the refugees that are confined to the prison that is Gaza.

We reach the flag, the flag has become tattered from its weeks of flying amidst the bullets of the no go zone.  A few weeks ago the Israelis had shot the flag pole until it fell; we planted it again that day. Now though, it is tattered, some young men pull down the flag, and replace it with a new one. We are standing only about 70 meters from the wall, six meters of gray concrete ugliness. Smokestacks belch pollution in the distance. Sabur Zaaneen from the Local Initiative speaks, “The resistance will continue until the Israeli occupation is no more, we ask the free people of the world to stand with us in our resistance to oppression.” An Italian activist speaks; she too denounces the occupation and its crimes and calls on the peoples of the world to support the Palestinian struggle for freedom. We leave to sound of music.

As we walk back to Beit Hanoun, Sabur gets a call. It is the office at Erez, at the border crossing. They are warning him that the Israeli’s had wanted to fire into the crowd, the Israeli’s claimed that they were scared in their concrete towers of civilian protesters with their flags. Perhaps we were like a nightmare, the people that they thought that they had disappeared forever coming back to haunt them, ghosts returning to their homes which had been stolen from them. That is the problem with living on stolen land, in stolen homes, sometimes, no matter how far away you have driven the owners, sometimes you see them again, and you are reminded that the land you live in belongs to someone else. We are not ghosts, we can be killed by Israeli bullets, but no matter how many you kill, the land remains stolen, and nothing stolen is ever really yours. No matter how big your guns, how thick the concrete of your walls, you are afraid of the ghosts which haunt the scene of your crime.