The selective Israeli permission system prevents many families from Nil’in from reaching their land behind the wall to pick  their own olives as the olive harvest season nears its end. The families who received permissions have until the 10th November to pick their trees Most of the Palestinians from Nil’in who received permission are women and young children studying, forcing them to choose between school obligations and the important harvest of olive trees. 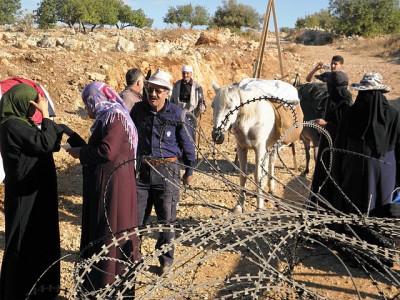 Harvest beyond the barrier - Click here for more imagines

In the morning the families who have land behind the Apartheid Wall in Nil’in gathered in front of the gate to be allowed access to their land and pick their olives. The gate was supposed to open at 7 AM but the families had to wait more than an hour before the gate was opened and two soldiers called the Palestinians one by one to enter. Palestinians who did not get permission gathered together with Palestinians with permission. If they by chance were able to enter without permission, they could protest the system of land grab by illegal Israeli occupation and the selective system of permission and collective punishment.

Yet the soldiers prevented everybody without a permission to enter. Yet they acknowledged the ownership of the land, admitting to the land grab, as they stated to those who waited that, “Only Palestinians with permission a can enter her land.”

The soldiers ordered the families to be back at the gate at 4 pm but the soldiers again showed up an hour later and left the exhausted families to wait for an hour.

The Palestinians who went to their land behind the wall found their trees in bad conditions because they were not able to cultivate the trees throughout the year.

One of the Palestinians who was not allowed entrance to his land said, “Before the wall [was built] we would work on our land everyday, and now we are not even allowed to harvest. My children have a skin condition that only can be eased by using the expensive olive oil. Now I have to by the oil instead of harvesting it from my own trees.”

Israel began building the inhumane separation barrier in May 2008, first with a fence marking the construction route of the fence, when in 2009 the fence was replaced by a concrete wall. During the resistance of the wall’s construction, five Palestinians, all children, were murdered by the Occupation Forces.

Ahmad Yussif Amira a 9 year old child was killed in the end of July 2008 and at his funeral Yussif Amira, 16 years old, was killed with a rubber coated steel bullet shot at close range. Muhamad and Arafat Khawaja were killed the same day as the bombing of Gaza in the end of 2008, and Aqil Amira was killed with a 22mm bullet in June 2009 when he tried to carry away a wounded child. The numbers of injuries are uncountable since the demonstrations began in 2008 and in periods the demonstrators faced life bullets during every demonstration because the Occupation Forces had decided to break the bones of all young men resisting the wall. LINK

In 2010 two young boys with learning disabilities signed confessions when facing time in prison. Three members of the local popular committee were imprisoned for around a year for among other things, organizing foreign presence at demonstrations, leading the young boys to through stones and participating in what Israel claims to be illegal demonstrations.

Though facing this massive repression of death, injuries, and imprisonment, demonstrations are still taking place every Friday after midday prayer to resist the presence of the Apartheid Wall.