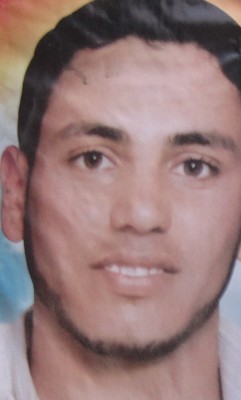 Nasr Ibrahim Alean was a 23 year old farmer from Beit Lahia.  He was murdered on November 3, 2011.  He was picking strawberries in his field when he was shot in the leg by the Israeli army.  He called his friend Muhammad Abu Helmeyyah, 22 years old, to help him.  Muhammed tried to take him to safety, but they were both killed by a missile from an Apache helicopter.  Nasr was not the first farmer in Gaza murdered by the IDF, and he will probably not be the last.

When Nasr was killed he was working in a field 500 meters from the border.  Outside of the Israeli imposed “buffer zone” which is in reality a 300 meter zone of death that surrounds Gaza.  This isn’t uncommon; the high risk area around the border extends as far as one or two kilometers according to the UN.  Nasr knew that he risked his life when he went to work, but he had no choice.  He needed money to get married, and working on the land was the only work that he could find.  Gaza is under siege, and unemployment is rife.  Not only are many imports banned, but most exports are banned as well.

We set in the mourning tent talking with Nasr’s family, hearing their stories, seeing their pictures of Nasser.  A cousin showed us a video of them picking up the body.  There was a giant hole in his head.  They tell us that Israel did not allow the Red Cross to pick up the body immediately; it sat for several hours, until finally the ambulances came.  Too late, Nasr was already dead.  Muhammad was already dead.  They told us worse stories, of bodies that no one was allowed to pick up for ups, bodies that the IDF left to rot, everyone forbidden to claim them.

Nasr’s brother was getting married in two days.  One of his aunt’s heard the story as she had her eyebrows done in preparation for the wedding.  She says of him, “He wasn’t in the resistance, he was just trying to work,” and continues “They don’t even want us to work. If it wasn’t for the United Nations, I don’t know what we would do.”  His uncle tells us about how he used to work in Israel.  He worked as a driver.  One day a woman got in with her young child.  She abused him in front of the child.  He asks, “How can people who abuse you in front of their children teach their children about peace?”  He doesn’t seem to have much hope.  They talk of going to human rights organizations to complain about Nasr’s murder, but they do not really believe that they will help.   Nasr hadn’t given up though, he went to pick strawberries on Thursday because he wanted to live, because he wanted to get married and have children and a house of his own.