New
Home / Gaza / Loay Auda: From a closed cell to the jail of exile

Loay Auda: From a closed cell to the jail of exile 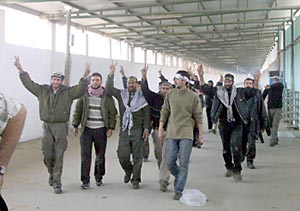 Loay Auda, in Israeli prisons since 2002, was released in the last prisoner swap exchange. Native of Jerusalem, he was of the many deported to Gaza. In an interview with International Solidarity Movement, Loay and his mother describe the night of his arrest, the solidity of prisoners in the face of abusive tactics, and the meaning of freedom despite the many who still wait in the shadows of Israel’s industrial colonial complex.

The words of Umm Izrod, mother of an exiled prisoner

“It was April 5, 2002, during the second intifada. My son called me saying that we could finally meet, I could embrace him again, see how he was. He was hidden for 9 days in Ramallah, where there was a curfew, because he was wanted by the Zionist occupation forces. During those interminable nine days I did not hear from him, so we menaged to meet in the house of my sister, which she did not use because she had gone to live elsewhere. We sat, we cooked potato chips and drank coffee, then Loay had to take a shower, because for nine days he could not do it, then we were tired and went to sleep.”

“At two in the morning I heard a noise. I thought they were the patrols that monitor compliance with the curfew, but then I heard the soldiers who called us by our names. ‘Come out with your hands up!’ they said.

“I tried to wake my son, ‘Get up, get up, they are coming to get you!’ And he did not wake up; who knows how many days he did not sleep well. From the outside they continued to call our names and surnames. I woke him up with more energy. We were completely surrounded, we would never be able to escape. Soldiers were throwing stones at the windows. They continued to call us and we did not respond. We started talking about the arrest, and we told each other, ‘We must be strong and do not talk, do not say anything. Even if they torture us, we must resist.’

“At some point in that chaos we were even joking and kidding … Around us, the Zionists had a large deployment of vehicles, helicopters, tanks, bulldozers … It seemed that we were going to be bombed!

“At 6.30 we heard the door open. They went to my sister’s house to pick up the keys, and had used her children as human shields to open the door. I came out, and I tried to keep the soldiers busy, they told me to call my son. I did not want to come because I was convinced that if he would come, he would be shot.”

When he got out, his mother, terrified, tried to protect him from the soldiers with her body.

“They took my son and put him on the sidewalk for questioning. I’ve brought the shoes first and then the cigarettes, and the soldiers insulted me. It was completely dark, in the streets there were only the occupation forces because of the curfew, but I could see neighbors peering from the windows.

“I told my son, ‘You are the greatest. You see all these dogs around you? Not as good as the sole of your shoe. Remain strong and you will be released.”

Her son replied, “I will be released only when old,” and his mother recounts when a soldier said, “I hope you die before being released.”

The mother continued to describe her son’s arrest.  “They blindfolded him and called me to kiss him one last time, and then they loaded him onto the jeep and left.”

The treatment that was answered with strike

On his way to prison, the jeep stopped, explained Loay. They peppered him with a barrage of questions, and threatened to take revenge on his mother if he  did not cooperate.

The first period of detention, the so-called “investigation” is probably the worst time for each prisoner. Psychological and physical tortures are applied to try to get information on the activities of the prisoners themselves and on other people. The interrogation of Loay lasted 55 days and was held in the Russian Compound, a former Russian church occupied and used for interrogations.

“They were questioning about my own activities but also about my comrades. The torture was more psychological than physical. The Zionists had learned that if they physically torture the evidence remains, yet psychological torture is more difficult to prove. They threatened to arrest members of our family. We were tied to a chair for consecutive days. We were bound in rooms that played loud music.”

Loay was transferred many times. Initially he was confined to Askelon prison, then prisons in Bir Seb’a, then Nive Tirtza, then back to Ashkelon, then Gilbo’a to Shatta and finally back to Gilbo’a.

“In prison, we organize,” said Loay. “The members of each party choose a spokesman, and the spokesman discusses the strategy to ensure unity. Nobody was allowed to talk to the guards except the one whom we collectively gave that position.”

He continued to describe the conditions prisoners had to endure, like the violence of the police, humiliating searches, collective punishment, and days of isolation. There was only an hour or two of outdoor time per day, and  family visits were often forbidden. The food was cheap, and the diet was not healthy.

“Our main demand was about the end of isolation. People in solitary confinement were locked in a small cell by themselves. And when given outdoor time, it was at odd hours and away from other prisoners, while still being chained. After two years in this situation, the psychological effects on prisoners begin to get really serious. At that time more than 30 prisoners were in solitary confinement for periods ranging from one year to 13 years. 10to 15 prisoners were in solitary confinement for longer periods. Ahmad Sa’adat was at his third year of isolation, and his psychological and physical health was deteriorating. We did some short strikes previously, a couple of days at most, but it was time to go through with something larger.

“The situation became even worse after the capture of the soldier Shalit. The soldiers attacked us more to try to make more pressure for his release. We could not study, books were not allowed.  We had arranged for an escalation of the protests. Then other people were added to each week. For example, I striked only the last week with the largest group. There were already 420 people and [when we joined] we were 300.”

The strike was not restricted to food, there was also a form of non-cooperation with the Zionists.

We had stopped to assist in the count, we got together no longer standing when it was time, and for that we had deprived at the time of any visit to family or lawyers.” prisoners in Israeli jails are counted more than once a day, when the jailer passes they are forced to stand in front of the entrance of the cell, under normal conditions if they refuse they are punished with beatings or a few days of isolation.

He said that the repression of the strike by prison guards was not a trivial thing.

The Zionists had left us nothing but water, and we were able to hide salt in some of the gaps of the beds. We had on heavy clothing, because one on hunger strike feels colder than usual. During the strike they continued to move us from one cell to another, from one prison to another. Three times a day the soldiers came and searched the cells from top to bottom, leaving all our other personal belongings in the center of the room. Already weakened by hunger, three times a day we had to collect our things and put them back in place. They deprived us of bottles [to drink from], so all we could do to drink was to drink from the same tap. They kept telling us that other prisoners in other prisoners had given up the strike, but we knew that was not true.

He explained that he was in solitary confinement for several days as punishment because he was on strike, and therefore knew nothing of the exchange.

He continued to speak about the attitude of the Zionists against them in the light of this exchange.

The names of those who were included in the agreement were not clear. The jailers had fun playing with our nerves. One day they came and said somebody was free, and the next day would that we were going to stay in prison. I did not have the certainty that I would be released until 10 minutes before, when they came to pick me up. Even when they were taking people to free them, they amused themselves and did not tell us anything. They passed by a cell and would call out, ‘Come with us,’ without saying where they will take him. Then the would come back, call to another, and say ‘Come with us.’  Until the last moment it was not clear which names were included in the list.

The outlook of an exile

Loay, a native of Jerusalem with 162 others originating in the same city or the West Bank, was deported to Gaza. His mother and another brother were able to visit him because, coming from Jerusalem, they are able to cross the border between Egypt and the Zionist entity. Other people were deported from the West Bank  yet cannot even be visited by family.

Loay explained, “In a year, 18 of us will return to the West Bank… And all the others, including myself, have no date  to return home. Perhaps we can never return. ”

Loay was excited about the fact that 1027 prisoners were released.

“This exchange was a fantastic opportunity. When you are in prison, even 5 comrades freed means a lot for you. Imagine the happiness in knowing that 1,027 will be released! This is a victory even for those inside. My comrades still in prison are glad I’m out.”

In an appeal to those released and the greater community, Loay said, “I ask the men and women who are out of jail to think about the prisoner question in an unitarian way, far from the logic of political parties. I ask, as a human being, to appeal to your humanity to apply pressure for the sake of Palestinian prisoners in Israeli jails.”

Silvia Todeschini is a volunteer with International Solidarity Movement.