Anonymous attackers spray-painted “price tag” and threatened to plant a bomb in the Jerusalem offices of “Peace Now” on Sunday. 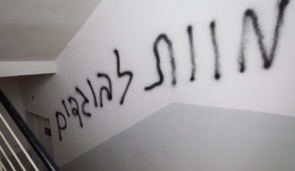 Hagit Ofran, director of Peace Now’s Settlement Watch project, said that at around 8 P.M., the office intercom buzzed and a man’s voice said, “The building will explode in five minutes.”

The police were called to the scene, and the two-storey building was evacuated.
Jerusalem police are now scanning the scene, and have begun searching for the perpetrators. Last weekend, a red star of David was also spray-painted onto the building.

Peace Now Director Yariv Oppenheimer said in response on Sunday that “we fear that the next stage is that the residents of the building next to our offices will be harmed. We submitted a complaint over the graffiti on Friday that has not been dealt with. I hope that the police will see the writing on the wall and will deal with it accordingly.”

“We have warned, including in a petition to the Police Commissioner, that Peace Now is being threatened,” said Oppenheimer. “The political leadership backs up these incidents. Even if, on the face of it, there is condemnation, in practice the hooliganism of the right has support in the Knesset.”

Two months ago, similar graffiti was spray-painted on the door of Ofran’s home, and on the wall of the stairwell of the building she lives in. Some of the graffiti included the words “death to the traitors” and “Migron price tag.”

Extremists adopted their “price tag” policy to demonstrate discontent with the government’s decision to freeze construction in West Bank settlements. Recent incidents have included the torching of a Mosque Tuba-Zangariyya in October and the vandalizing of an IDF base in September.