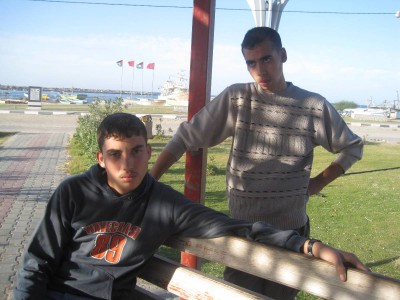 Seventeen-year-old Abdul Qader Baker still has no idea why the Israeli navy surrounded his small fishing boat at 4 a.m. Thursday morning, ordered him, his 17-year-old cousin Mohamed Baker, and his uncle, Arafat Baker, to strip off their clothes, stand shivering in their underwear for an hour and a half and ultimately forced the group to Ashod.  The two high school students were released approximately twelve hours later, but their uncle remains in Israeli detention.

“I was so scared and it was so cold,” Abdul Qader reported.  After the Israeli navy ordered the group to take off their clothes, Abdul Qader stated that “for two hours I had to stand, not moving, while [Israeli] snipers pointed their guns at me.”

Abdul Qader and Mohamed are in the twelfth grade, and often help their families fish when there’s a school holiday, as was the case on Thursday.  According to Abdul Qader,“[w]e went to retrieve the nets we had dropped and then suddenly I saw the Israeli gun boat in front of us, shining a big light into our boat.”

While the Israeli navy forced Mohamed and Arafat to jump into the sea, and swim towards the warship, Abdul Qader was told he could retrieve his fishing net and go home.  “But when I started taking up the net, the Israelis opened fire and told me to leave the net and jump in the water.”

On the gunboat, Mohamed and Abdul Qader reported being blindfolded until they reached the port of Ashdod.   “They took me to the harbor and when they removed my blindfold, I saw 40 soldiers. I was afraid and terrified,” added Mohamed. At Ashod, Mohamed was examined by a doctor, while an Israeli soldier photographed him.

Israeli authorities subsequently placed metal cuffs on the hands and feet of the two boys and eventually transferred them to Erez where they interrogated them for several hours.

At Erez, Israeli soldiers placed Mohamed and Abdul Qader in separate rooms and showed them various maps of Gaza, asking them to identify their houses and the names of their uncles and brothers.  The Israelis also asked both boys to identify Hamas training locations, where Hamas people lived, were asked about a monument to the 9 Turks killed by the Israeli navy on the Mavi Marmara in 2010, whether the prisoners released in the recent exchange were staying at a particular hotel in Gaza City, and about open spaces used for a playground and a fish farm.

Israeli authorities released the boys at around 5 p.m. Their uncle, 28-year-old Arafat Baker, is still detained.  “I have no idea why they arrested me,” said Abdul Qader. “I didn’t cross the 3-mile line,” he added referring to the fishing limit Israel has imposed on Palestinian fishermen in Gaza.  “The Israelis are criminals. This is no way to treat human beings. It took me hours to stand on my feet [because of the cold], I couldn’t move my leg.”  Abdul Qader added,“I don’t know yet if I will go fishing again. I need time to mentally recover from this.”

Abdul Qader’s right side and chest still hurt due to hours of standing in the cold and being forced into the sea. Israeli authorities did not permit the boys to call their families or an attorney, nor did they ever tell the boys why they had been detained or what laws they were alleged to have violated.