Independence Day in the Buffer Zone 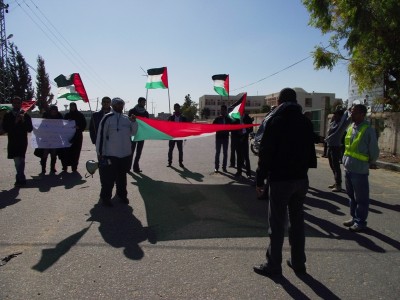 Twenty three years ago today the Palestinian declaration of independence was released.  Written by Mahmoud Darwish, and unveiled to the world by Yasser Arafat in Algiers where he was living in exile like millions of other Palestinians.  Today, in Beit Hanoun, we, the Local Committee of Beit Hanoun, the International Solidarity Movement, and local citizens of Beit Hanoun marched into the no go zone just as we have done every Tuesday for the last three years.

We gathered on the road beside the Agricultural College, raised Palestinian flags, and started to sing as we marched.  We were about fifty strong.  Men and women, Palestinians and Internationals, marched together to celebrate independence.  As we crested the hill that lies on the border of the no go zone the person next to me commented how nice it was that the flag that we had placed in the no go zone was still there, the previous flag had been used by Israeli soldiers for target practice, we had found it laying in the dirt, it’s staff smashed by a bullet.  Our flag was still there, the flag that has been flying in the face of Israeli bullets for sixty three years, through the Nakba, the Naqsa, the Occupation, the Intifada’s, the flag still flies.

We marched into the no go zone, this area of life transformed into a place of death.  The scarred earth that so little is allowed to live in, ripped up every couple of months by IDF bulldozers.  Beyond our flag is giant concrete fence lined with towers full of guns.  Above us a giant white balloon to watch our every move.  Demonstrations in Gaza are not met my soldiers with batons, or tear gas, or even rubber bullets, they are met with live fire, sometimes with tank shells.

We paused by a giant concrete block that we had painted with the Palestinian flag in an earlier demonstration.  Sabur Zaaneen from the Local Initiative of Beit Hanoun climbed onto the block to speak.  He vowed that the Palestinian people “continue the popular resistance and the struggle, until the end of the Occupation and the Palestinians gained their freedom and independence.”  His message to the world was that “we invite you to work with us in the struggle for freedom in Palestine.  Free people of the world must reject political blackmail and bribes from Israel and America as we recently saw in the United Nations.”  His speech was followed by a release of balloons into the no go zone and debka dancing.