New
Home / Hebron / Imneizil demolitions: “Hanging between the ground and the sky”

Imneizil demolitions: “Hanging between the ground and the sky”

The solar panels in the village  of Imneizil, near Hebron, became effective almost two years ago,  improved the living conditions for about four hundred inhabitants in the village, but recently  residents learned that the Israeli army issued a demolition order for the solar power installations.

“When the electricity came, we could have light at night. So right now, we could sit with our friends in the night, and we can see each other,” said  25-year-old Nihad who has seen her life change since electricity become available in Imneizil. She talks about how the school now has access to computers and printers, and how radio and TV have connected the village to the rest of the world. Now they have washing machines, and refrigerators that make it possible to store food.

Nihad gives her 3-year-old son a hug and states that she also has a four-months’ baby at home. 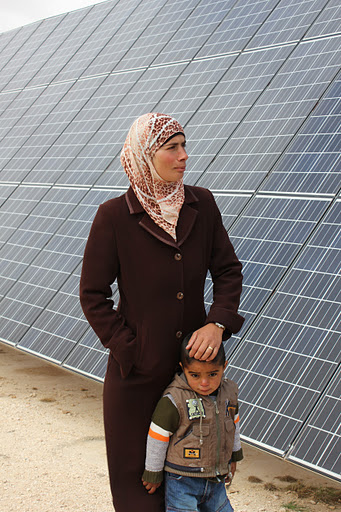 Threatening the light of the village - Click here for more images

” Earlier, women used to go to Yatta to have an ultrasound. It is far away and it costs a lot of money to go there. Now, those who are pregnant can have ultrasound here at the clinic.”

Before the installation of solar panels, the village had no electricity, and the evenings were sparsely lit by dangerous kerosene lamps and candles. A few households had access to diesel generators that were used at parties and weddings.

The solar cells that have been installed cannot satisfy the village’s full electricity needs, but it is sufficient for moderate household consumption, and the needs of the school, health clinic, and common water pump. During the day people are trying to limit their consumption for the school to have enough electricity.

The project was planned to be extended so that later there would be electricity for regular usage. But  in October, residents learned that the Israeli army issued a demolition order for the solar power installation. The consequence is that the power will be lost for forty households, they health clinic, and the school. The reason is that the solar panels were constructed without a permit from the Israeli Civil Administration which controls the occupied territory of Palestine.

– When I think about that they will cut our electricity, I am very, very angry, Nihad says.

Imneizil is not the only village in Palestine affected by the demolition policy. During the years between 2000 to 2007 nearly five thousand demolition orders were issued for Palestinian buildings, of which one third were implemented.

“They never requested a building permit here,” says Ali Mohammad, head of the village.  “And you see that the other structures in the village were built thirty years ago. So we never applied for a building permit for solar panels, either. If we would try to apply, we know that we will never get a permit.”

The reason for the Israeli Civil Administration’s influence over Imneizil is that the village is located in what is known as Area C, which is under Israeli civil and military control.

“It is apparent to  us that it means to displace us from here, to push us out of this area, silently, without declaring it, Ali Mohammad continues.

Demolitions are illegal under the Geneva Convention. The Fourth Geneva Convention 53rd article provides that: “Any destruction by the Occupying Power of real or personal property belonging individually or collectively to private persons […] is prohibited, except where such destruction is rendered absolutely necessary by military operations.”

“I don’t think these solar panels cause any harm to anyone,” Ali Mohammad says. “They’re not affecting anybody. They’re not cutting the road to the settlement. I cannot understand what’s the point of coming here to demolish these solar panels! Now we’re astonished with the Israeli Authority’s demolishing orders. We’re feeling that we are hanging between the ground and the sky. ”

Imneizil is located in Area C, which makes up 62 percent of the West Bank area. Building permits for houses and other devices, such as structures for collection of rain water, must be applied for from the Israeli Civil Administration.

Jenna Bereld is a volunteer with International Solidarity Movement (name has been changed).