Today marked the 5th month of the village of Kufr Qaddoum’s campaign of non-violence against the Israeli military’s decision to illegally close their main  road to Nablus.

What began as another peaceful demonstration quickly transformed into a military assault on the village. Over 200 villagers gathered, joined by solidarity activists from Canada, Sweden, UK, Denmark, America and Israel and began making their way towards the road, which was closed by the military 8 years ago. Over 30 Israeli soldiers and 4 military vehicles were stationed on the road, waiting behind barbed wire, as the assembly of people drew closer. 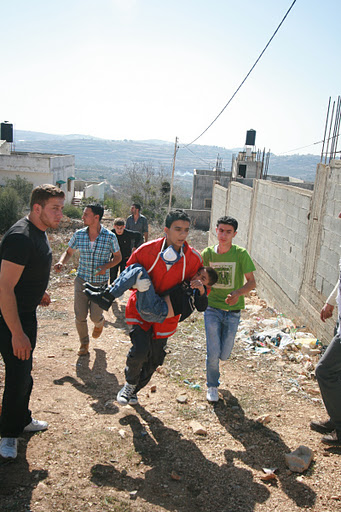 Following the first barrage of tear gas, some soldiers began to make their way into the village. The soldiers picked up one villager, 30 year old Hazzem Barham, who was lying down unconscious from the tear gas and arrested him; carrying him into their jeep.

Minutes later, after documenting the arrest of Barham, soldiers targeted an activist from the United States, handcuffed him and took him into a second jeep. Whilst arrested, soldiers took turns beating him, presumably for his solidarity with the non-violent Palestinian resistance.

The demonstration continued  in absence of Barham and the US solidarity activist.  The soldiers entered further and further into the village. Tear gas canisters and rubber bullets began bouncing off houses, with one tear gas canister landing on the mosque where injured villagers were being assisted.

Following a 2 hour assault the soldiers withdrew, being followed out by a crowd of villagers gathered to ensure they left.

Barham and the US activist have been taken to Ariel settlement police station where they are being charged with throwing stones – a charge completely discredited by the video footage taken during the demonstration. From within the police station, the US citizen attests that Barham has been subjected to gross humiliation by both soldiers and settlers inside Ariel – including being spat on, taken photos of and made to crouch down with his head between his legs.

The road closure means that rather than being 13km from Nablus city the most direct route to the village takes 26km. This closure has already claimed the lives of 3 villagers who died after Israeli soldiers denied the ambulance, coming to assist them, access to the road.

Thom Andrews is a volunteer with International Solidarity Movement.