Three people were arrested Wednesday in a night time raid earlier in the week. Rami Tamimi, 33, Uday Tamimi, 20, and Muatasim Tamimi, 16 years old were all taken away. The Israeli military justified the arrest Uday and Muatasim because they will be used as witnesses against Bassem Tamimi in his court hearing next week. Bassem Tamimi  is one of the local members of the Popular Committee who was arrested in Spring, 2011. The main evidence in Bassem’s case is the testimony from a 14 year old boy, which was fundamentally flawed and violated the rights set forth in the Israeli Youth Law. The same mistreatment was used against Muatasim who was arrested Wednesday night in order for him to testify against Bassem.

Bassem Tamimi has a long history of being targeted by the Occupation. He has been arrested  by the Israeli army 11 times to date, though he was never convicted of any offense. Bassem Tamimi has spent around three years in administrative detention, with no charges brought against him. After popular demonstrations began in An Nabi Saleh 10 houses have gotten demolition orders, including the home of Bassem. Bassem’s wife, Nariman Tamimi, has been arrested twice, whiles two of his young sons have been critical injured.

In the last court proceeding against Bassem, he gave a statement dening the unlawful charges against him but proudly admitting to organizing demonstranstions in An Nabi Saleh and stuggeling against the Occupation.

On Friday, soon after the noon prayer demonstrators gathered near the mosque of An Nabi Saleh, where one of the local coordinators gave a small speech about solidarity with the struggle in Jerusalem and also about the negotiations and agreements between Hamas and Fatah. He emphasized the importance of the leaderships’ focus on the resistance and support of it as well. In the end he talked about the night raids of An Nabi Saleh and arrests of youth and minors in connection to the arrest of three people from An Nabi Saleh Wednesday night. 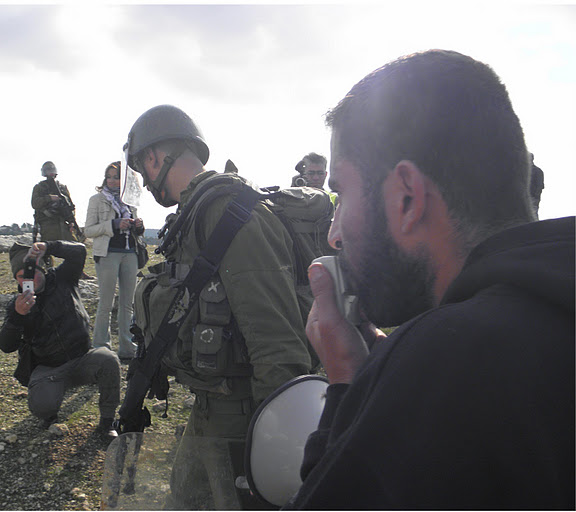 In the end the Occupation Forces withdrew all units to the entrance of the village, and demonstrators ended the demonstration with a small gathering.