At 11 AM this Thursday the 24 of November, Mohammed Ka’abne and his family of Beit Hannina, were shocked by the arrival at their doorstep of an Israeli military unit accompanied by several police officers and two bulldozers.

Without issuing any kind of eviction order, or notification to the family, they proceeded to demolish the two houses of Mohammed’s sons and their families, and the tent where Mohammed himself has lived for five years. 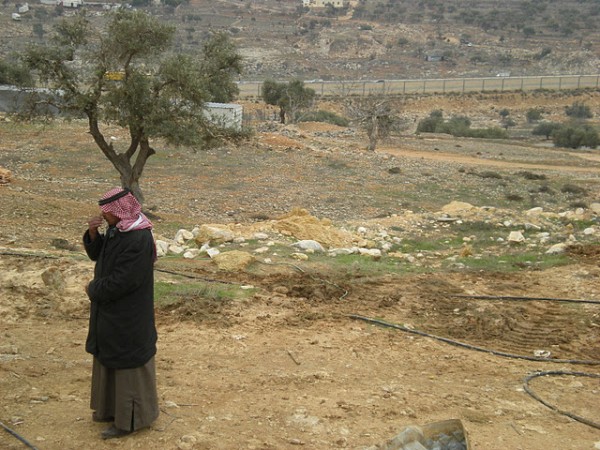 When the the bulldozers arrived at the scene at 11 AM, the accompanying military assisted by shooting several teargas canisters throughout the small area. In addition to this they forced the men and women to step aside from the houses.

According to Mohammed they also arrested his grandchildren and beat them, while the bulldozers tore down their houses.

Since the military did not issue any kind of warning in advance, all of the family’s furniture and other belongings were still in the houses when they were torn down.

When the two houses and the tent, including their water tanks, had been destroyed, the military left the family who, with the help of friends and neighbours, started to collect the few belongings which might be saved.

A short while afterwards international observers and activists came to the location to record what had happened. Around 3 PM personnel from the Red Cross also arrived with tents for the family to stay in.

The Bedouin family of Mohammed Ka’abne, 67 years, includes his three sons and their respective wives and six small children.

Mohammed grew up in the South Hebron Hills from where he was forced in 1948, when he moved to Jericho, and some years later came to Beit Hannina.

According to Mohammed he had to spend several thousand shekels to buy a piece of land of 1500 m2, including money for a lawyer to get a building permit and money for the military to let him stay there. Muhammed also says that after having bought the land, he waited for five years for a building permit. He then realized that he couldn’t wait any longer and decided to build the two houses for the families of his sons and put up his tent, although he didn’t have the legal permit to do so.

Five years later the family ais now being forced to live in tents from the Red Cross.

Talking about the brutal way that the demolition was carried out Mohammed said, “If they would have told us to destroy the houses with our own hands we would have done it. But not like this.”

Beit Hannina is a Palestinian neighbourhood in East Jerusalem which has suffered from the establishment of Israeli settlements since 1970. In addition the area also took a heavy blow when the Israeli government started to build the illegal Segregation Wall straight through Beit Hannina in 2004.

A walk between neighbours before the construction of the Segregation Wall might take a few minutes has now been replaced by a bus or taxi ride around the wall and through the Qalandia checkpoint, which takes about 45 minutes, and which of course is not possible for Palestinians without Israeli citizenship.

The family of Mohammed Ka’abne live in Beit Hannina al-Balad, which is supposedly under the control of the Palestinian Authority, yet still the Israeli government decides who they allow to live here and for how long.