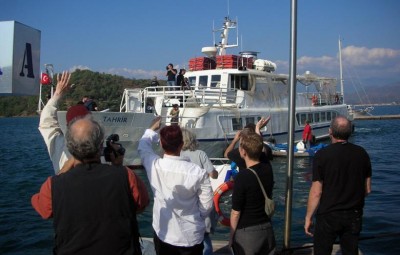 Palestine activists call on the international community to keep pressuring Israel to end the blockade of Gaza after the Freedom Waves flotilla was assaulted by Israel in international waters.

Gaza — Palestinian activists have condemned the Israeli navy’s assault on the Freedom Waves to Gaza flotilla in international waters.

Huwaida Arraf, a Palestinian-American human rights activist said, “This kind of violent, irrational behavior by Israel is similar to that which we see in other brutal regimes that are being challenged by the people. It’s important that we don’t give into this violence and that we keep taking to the sea, to the air, to the streets, to prove that violence and military might is not more powerful than the rights that we are fighting for.”

The 27 activists and journalists aboard the boats were taken, against their will, to the Israeli port of Ashdod where they were put in the custody of local police. Benny Gantz, the Israeli army Chief of Staff gave the order to board the two boats, which were carrying US$30,000 worth of medical supplies, at around 3:15pm, Gaza time, after Israeli naval vessels had tailed them for nearly two hours.

The flotilla crew was first contacted by the Israeli naval around 1:35pm and radio communication was later established. When asked for details of their destination, crew of the flotilla responded with “the betterment of mankind.” Israeli forces then directed the flotilla to redirect to Turkey, Egypt, or the Israeli port of Ashdod. Flotilla members refused and their boats were boarded and commandeered by the Israeli navy, who led the boats to Ashdod, regardless.

Jehan Al Farra, a Palestinian blogger and student explained, “The flotilla’s arrival would have meant a lot for Gaza. The attempt itself reminds us that there are efforts to break the siege, declaring it illegal and to make the world aware of what is happening here. Remember that just because the siege has been ‘eased’ that doesn’t make it any less illegal.”

On 30 May 2010, just five miles away from today’s assault, nine activists were killed aboard the Mavi Marmara boat as their vessel was intercepted and attacked by the Israeli navy. Today, Israeli naval officers, who typically carry heavy weaponry, boarded the ship and forcibly took control of the two boats.

Before being boarded, the boats lost radio contact for over an hour, leaving supporters praying for their safety. As communication was cut, Twitter users in Gaza filled the silence with messages of support; 22-year-old blogger Lina Al-Sharif tweeted, “Praying for Freedom Waves.”

Rana Baker joined dozens of other Palestinians at Gaza port to stand in solidarity with the flotilla in symbolic gesture of solidarity. She said, “To me, Freedom Waves has already broken an extended blockade. Things need not to be clarified. Israel can no longer isolate Gaza, our cause is being contacted and supported by the 99 percent, the only one being isolated is Israel itself.” Again, in international waters, Israel attacked two small boats carrying supplies and 27 activists.

Earlier this year, Turkish Prime Minister, Recep Tayyip Erdogan, announced that, “Turkish warships will be tasked with protecting the Turkish boats bringing humanitarian aid to the Gaza Strip.” Many supporters were hopeful that this support would be provided to Freedom Waves to Gaza, despite the fact that the boats are Canadian and Irish.

An Israeli military statement said the vessels were advised they could “turn back at any point, thereby not breaking the maritime security blockade, or sailing to a port in Egypt or the port of Ashdod.” The release said that “the activists refused to cooperate.”

The blockade of the Gaza Strip, which has been in effect since 2006, is considered collective punishment by many governments, a crime that is illegal by international law. The UN has repeated called for an end to the blockade.