Tightened security at Tel Rumeida checkpoint cause an impromptu demonstration by the schoolchildren, resulting in seven injured children, and injuries to the headmaster. Teachers of Tel Rumeida’s school were told they must begin to pass through metal detectors and present their bags for search, despite the permission they have had for the past 7 years to pass through a separate gate. The rules have also been changed for those suffering heart complications, and pregnant women, who carry permits that normally would allow them to avoid the metal detectors. The children of the school emerged, chanting slogans and holding posters. Finally, the children exited the checkpoint to be with their teachers, and began classes on the sidewalk. Seven children reported injuries and six went to hospital. The head master of the school also reported injuries from soldiers aggressively handing her.

In Tel Rumeida, Hebron, around 7:30 Tuesday morning, the teachers of Tel Rumeida’s boy and girl school of grades 1-10 refused to submit to checks, instead beginning a silent demonstration by remaining outside the gate where they were refused entry. 9:00 am, the school children marched out of the school to the inward side of the checkpoint, demanding their right to education. Israeli military soldiers at times pushed the children. An Israeli police man grabbed two girls, about 12 years old, and dragged them out through the checkpoint, causing an uproar. He continued to grab outspoken children and pull them out of the checkpoint. Seven children ended up in the hospital with injuries from aggressive handling by soldiers. Some were pushed against a stone wall. A female settler drove through the demonstration, aggressively pushing both adults and children with her car. She drove around, and returned to drive through again. Many of Tel Rumeida’s inhabitants claimed that she pushes pedestrians with her car on a regular basis while driving through the streets that Palestinians can only walk on. 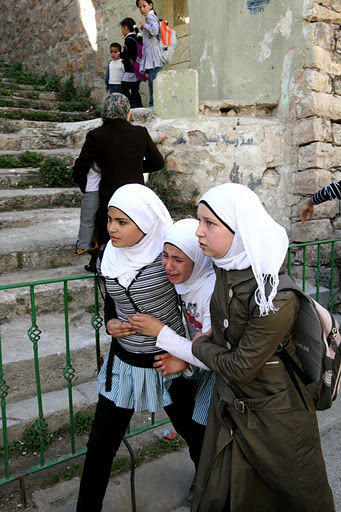 Before the children emerged from the school, a soldier was asked why restrictions are enforced only on the Palestinian residents, despite the violent reputation of the settlers. He replied, “I also don’t agree, but I have a mission to protect the Jewish people. I don’t want to be here.” Their batallion was newly transferred to this area, and soldiers said that their commander had come the day before and changed the rule. As the kids began the demonstration, the head of the school health department, Mohammed Abutherei was detained in a police jeep for at least half an hour because he was unable to control the over 100 children. “Police threatened that if I did not control the students, Tel Rumeida would no longer have a school” said Abutherei.

For the past seven years, teachers, those with heart complications, and pregnant women have passed through a gate without a metal detector.

Several of the teachers exclaimed that they will continue to hold classes on the street until the checkpoint’s rules are reverted. More protests are being planned.