Majd Ziada was barely out of his teens when he got arrested by the Israeli Occupation Forces. It was at the height of the second Intifada in 2002 when the Israeli army during its collective arrest campaign detained Majd on the evening of the Israeli invasion of the twin cities Ramallah and Al-Bireh. He was 19 years old.

Before he got arrested, Majd enjoyed playing basketball at Ramallah’s First Club in al-Tira. With the outbreak of the second intifada however, life became more grim. He lost his best friend who was killed by the Israeli soldiers, and Majd himself was once used as a human shield where he was forced to walk in front of the Israeli tanks. Just before he was due to take his final exams of his senior year (tawjehi) the Occupying Army raided his home and dragged him out where he was bundled into a jeep. His family knew nothing about his whereabouts or condition for fifty days after his arrest. They then learned from a newspaper that he had been beaten up in custody. 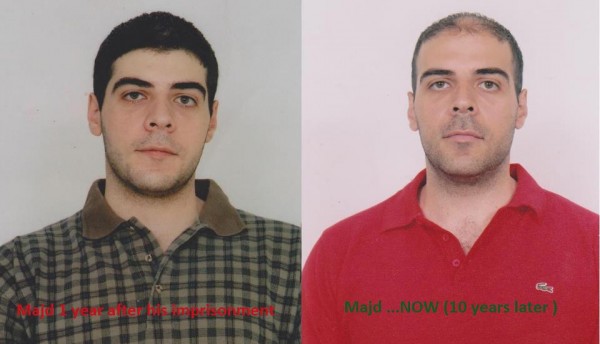 When he was four years old, Majd witnessed the arrest the of his politically active father, Mahmoud. He told his dad, “Don’t worry Baba, I will take care of my mother and baby sister.” In the absence of his father, his mother worked to support the young family. It was left up to Majd to look after his baby sister Raya, as he carried her, fed her, put her to sleep. His father was in and out of prison a total of seven times, and was never once convicted of anything. But because of the mangled policies of administrative detention, it was “legal” to arrest him and keep him detained for any period of time without ever knowing the reason why.

In a 2009 interview, Mahmoud Ziada recalls: “The Israeli soldiers searched our home, then they handcuffed me and took me to the military jeep that was standing in front of our house. As I was climbing into the jeep, my five year old son Majd shouted through the window ‘Baba Mahmoud, don’t lose courage!’”

Majd accompanied his mother to visit his father in prison, and he used to go with her to national meetings. At demonstrations he would shout national slogans and sing national songs.Initially, for Majds role as the getaway driver in a shooting of a mailman in a settlement, Majd was sentenced to 15 years in prison despite the fact the mailman turned out to be Palestinian and did not want to press charges. At his appeal, the military court (which tries all Palestinian prisoners) gave him an extra 15 years for a defiant statement he gave:

The unfair trial is not all. Two of the other three that were involved have already been released (including the actual shooter).

Majd suffers from a life threatening condition. He lost his hearing in his right ear due to acute ear inflammation, which could have been prevented had he received adequate medical attention. There is a huge risk that the disease could spread to the rest of his body, rendering it fatal, and so he desperately needs surgery.

His family are granted rare permission to visit him in prison. For the first seven years of his imprisonment only his youngest sister Hurriyah was able to visit him due to her status as a minor. After she turned sixteen, visits became more harder to procure. Afterwards limited permission was given to their mother to visit him once every few months. Last year Majd’s father was finally granted permission by the Israeli Prison Service to see his son. The last time Majd saw his family was two months ago, after a five year gap. Hurriyah and her mother were the lucky ones to go, as only two people are allowed on visits.

His sister Hurriyah has this to say: “I haven’t been able to hug my brother Majd Ziada for ten years because of the Israeli Occupation. When Majd was imprisoned I was 12, now I am 22.”

Majd Mahmoud Ahmad Ziada has been on hunger strike for 22 days.

We hold on to hope for his wonderful family and we ask for everyone to share this petition in the hope that perhaps Israel will release him in the next 550 prisoners set to be released over the next two months.

Take the time to help bring Majd Ziada closer to freedom by signing this petition. 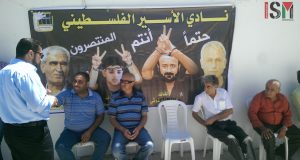