The Palestinian family El Jobor was unsuccessful in their attempt to harvest olives today as they met resistance from Jewish settlers and Israeli soldiers originating out of the Itamar settlement.  Accompanied by ISM volunteers the family climbed the hillside above Beit Furik and marched through the olive groves to within roughly 400 meters of the Jewish settlement, which sits atop the hill’s mount, before being confronted and forced back down towards their home.

International observers and volunteers met with the father of the El Jobor family, in Nablus at 7:30 this morning, and rode with him to his home in Beit Furik where they met his wife, children, and neighbors.  Carrying the usual tools of olive harvest, the buckets and small hand saw, the group began climbing the hillside towards the olive trees on the ridge, passing another Palestinian family about halfway up.  Once the lookout towers and settlement buildings became visible, the group advanced in short segments, pausing for a few seconds each time, checking for movements out of the settlement, and measuring the risk of continuing on.  The settlers were visible, but seemed to be going about their daily lives without paying much notice to the volunteers, until they came to about 400 meters of the nearest building. Everyone halted and began to watch as soldiers amassed in a group of about five or six. 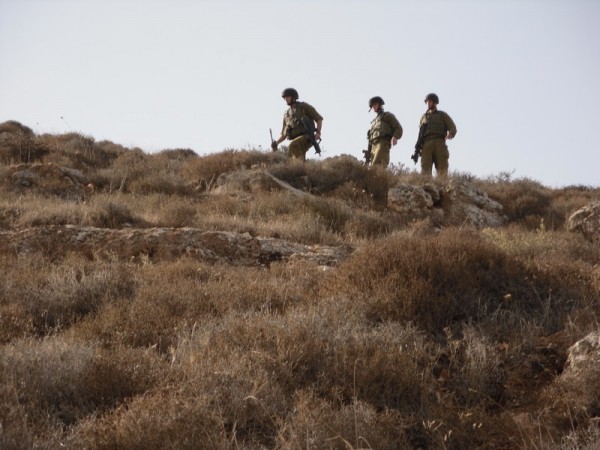 “We all stood our ground as they approached but began to take a few steps back when we saw how aggressive they were, and realized they were not about to negotiate or explain themselves,” said an ISM volunteer from France.

“Among the soldiers were two settlers who seemed to have some understanding with the army and managed to reach William and I even before the soldiers did.  They were both furious, began shouting as they approached, and then when they came up to us began physically pushing us across the chest and shoulders,” said the French national.

The Palestinian family was already turning around and climbing back down the hillside as the two internationals asked the soldiers for some explanation, but realizing it was no use, they too began their descent.

“At this point we heard a shift in the soldier’s yelling and turned to see an additional group of Itamar settlers racing through the army rank towards us, brandishing stones and beginning to hurl them at us.  At this point I turned tail and ran,” described another ISM volunteer.

The volunteers shouted to the settlers and soldiers “shame on you” and that they we were being peaceful.  The soldiers were trying to head off the settlers and prevent them from throwing the stones but without much luck.

About two thirds of the way back down the hill they were clear of the settlers and slowed up.  A new detachment of three soldiers appeared and stopped one of the older Palestinian men, asking for his papers.  Two of the soldiers broke off and headed down the hillside asking the other men to come back, but without luck.

An officer arrived shortly, along with two attending soldiers and spoke to the Palestinian man, as well as to the volunteers.  He explained that the farmers had been given a two week window in which to harvest but that this window had expired.  He mentioned that hundreds of IDF soldiers had been present during that time to protect the harvest but no picking seemed to have taken place.  He added that he will book and arrest any Palestinians who, after today, cross the road at the base of the hill and enter into what is considered IDF security-controlled territory.

“After this we reconvened with the rest of our party which was waiting for us a little further down the ridge and returned to the El Jobor home in Beit Furik, before returning to Nablus at about 10 AM.  It’s likely that the family will continue trying to harvest the trees,” said the volunteer.

Itamar was founded in 1984 and has grown in that time from just over 300 settlers to now more than 1,000.  It is situated on the hill mount above Beit Furik, southeast of Nablus, and occupies roughly 7,000 dunams of land, much of it believed to be land privately owned by Palestinians.  Tensions are high right now after the Fogel family murders in Itamar last March for which two Palestinian teenagers from Awarta were arrested in April.  The Itamar settlers have become very critical of the IDF, demanding that they stop providing protection to Palestinian farmers during the olive harvest, and that they prevent any further Palestinian incursion into the area surrounding the settlement.  Threats have been leveled and the risk of violence seems to be very high.