While the demonstrators were planting olive and eucalyptus trees, soldiers and settlers came down from the nearby outpost of Shima’a and threw sound bombs, firing tear gas at the demonstrators.

A few demonstrators went to the valley dividing Shuwika from the outpost to try to remove stones placed by settlers which formed a star of David as a symbol of conquering Palestinian land. They were shot at directly withtear gas from the Israeli Occupation Forces.

Two soldiers descended from the hill and stole the Palestinian flags placed in the valley, burning one flag while confiscating the other.

After an hour of protesting suddenly the soldiers ran towards the demonstrators, pointing their guns while running and chasing the them for one kilometer back to the Shuweika village.

While leaving the protest, a demonstrator said, “This was the first time in Shuweika [where we had] a protest like this, but hopefully it will be an ongoing event like Ni’lin and Nabi Saleh.”

In the past month there has been an increase of settler violence towards the Shuweika villagers. Not only did the settlers from the Shima’a outpost destroy olive trees from the village, but they also threatened and harassed shepherds herding sheep near the valley. 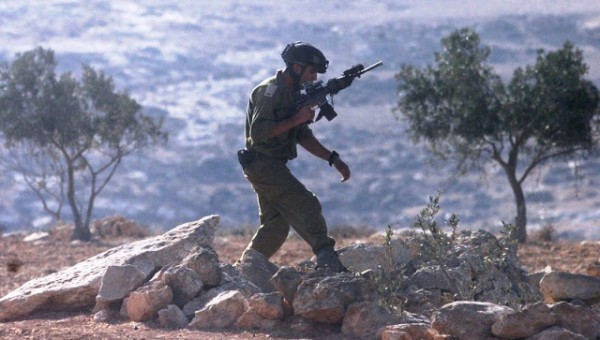