On Monday 24 October, Gaza’s Ministry of Detainees welcomed 163 prisoners from the West Bank who were freed in the exchange between the government of Israel and Hamas.

The Ministry promised to have permanent housing for each ex-detainee within one month, as well as offering them free education in any university in the Gaza Strip and the guarantee of obtaining a job. They also assured that they would work hard to help those with families to relocate them to Gaza if requested. 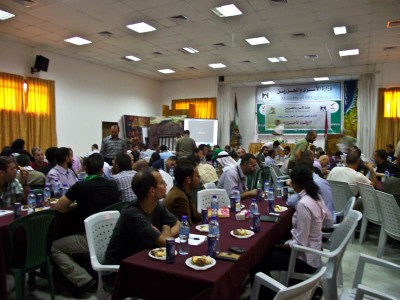 While some of the freed prisoners were joined by family members, one father-of-five was less fortunate. He explained, “I miss my daughter, she was two when I was arrested and now she is thirteen and even when she visited me in prison they forbade me from hugging her.”  His daughter and wife have so far been unable to get permission from Israel to leave their home in Bethlehem to welcome their father to Gaza.

The 163 in attendance came from all areas of the West Bank, but have been sent to the Gaza Strip, in contradiction of the Fourth Geneva Convention.