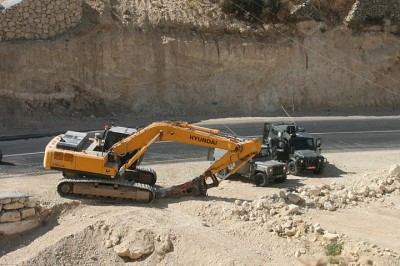 At 5:00 AM on the morning of the 6th October, approximately 30 armed soldiers came to demolish a house in Beit Kahil. The IOF woke up the family living in the neighbouring house and informed them about the demolition and declared the entire area a closed military zone. When he arrived,  Omar Ahmad Hussan Abdel Din, the owner of the house,  informed the soldiers about his lawyers appeal to the Israeli Court for getting the demolition order postponed until he had an official response to his application for building permission, but with no effect.

A member of the Abdel Din family said, “Why do we need a permission from Israel to build this is Palestine and Palestinian land? Though this is considered area C by the Israeli authorities, I do not recognise their authority, and anyways it is their bureaucratic way of stealing land.”

While a bulldozer was demolishing the Abdel Din house residence, the neighbourhood tried to prevent the demolition by throwing stones. The soldiers prevented them getting any way near by using sound bombs and shooting tear gas grenades. During the protest one of the tear gas canisters broke the window and entered a house resulting in three women and four children being taken to the hospital and treated for tear gas inhalation. An additional 2 people were injured by the tear gas cannisters, requiring 1 person who needed 3 stitches.

The village of Beit Kahil is divided by a valley with the road running to Hebron. In 2009 the houses on the one same side of the valley as an Israeli military base got demolition orders at once. Including the house of Omar Abdel Din, demolition orders were given to around 15 houses which are inhabited by around 100 citizens.

One of the neighbours said, “Obviously when we saw the Occupation Forces and bulldozers we were shocked and feared that they would demolish all our houses.”

In 2011 14 houses were demolished in the Hebron area, leaving 104 Palestinian homeless including 50 minors. Area C and B are the areas where Palestinians need to seek permission from Israeli authorities to build, accounting for 83 % of the West Bank.

According to the Israel Civil Administration, more than 93 % of the applications for a building permission are refused, and many Palestinians do not even bother to ask permission to build knowing they will be refused.