New
Home / Hebron / As settlers disrupt olive harvest, Israeli officer declares: “I am the law, I am God.”

As settlers disrupt olive harvest, Israeli officer declares: “I am the law, I am God.”

Intimidation of Palestinians in the Israeli-controlled H2 section of Hebron continued today as the Israeli military and settlers harassed Palestinians and international observers as they attempted to pick olives on their land in Tel Rumeida.

Around 40 students from different Palestinian universities marched onto the land at 11AM Saturday morning and began to pick olives along with local families, activists from Youth Against Settlements (YAS) and international observers.

At 12:30 PM the Israeli police confiscated identity passes for 20 Palestinians and, whilst checking their details, forced the group to stand together and individually filmed their faces.

The police declined to justify their actions, only insisting that they had a right to check the details of those present.  The Israeli military became increasingly belligerent as protesters challenged the legality of the actions and began to push and shove Palestinians and international observers.  After around 20 minutes the police returned the passes and allowed the detained Palestinians to leave.  They then ordered international observers to leave the olive groves or be arrested, claiming that the Palestinian-owned olive grove is “Israeli land” and that it was illegal to be on the land and “illegal to be in a group.”

Rafi Dagan, an Israeli commanding officer, stated “I am the law.  I am God” when asked to explain why he was flouting Israeli law by forcing people to leave Palestinian land under threat of arrest, without any paperwork to show that it was a closed military zone.

Earlier in the day, Israeli soldiers had pushed photographers attempting to document the olive harvest and confiscated an international observer’s passport for several minutes.  Under Israeli law, passports may be shown to the Israeli military but it is illegal for them to be taken away.  The Israeli military also briefly detained a young Palestinian man, apparently for running through the olive groves with a Palestinian flag, although he was released after around 10 minutes. 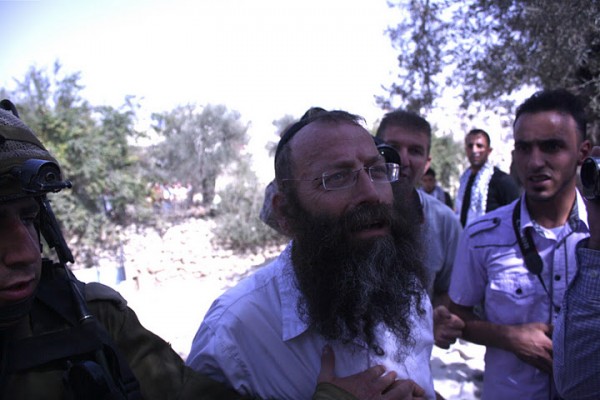 In addition to intimidation by the military, Israeli settlers arrived on the Palestinian land within minutes of the olive harvest beginning and began to harass people picking olives.  A group of around 10 settlers gathered in the lower olive groves in Tel Rumeida at 11:55am where Palestinians were busy picking olives.  Baruch Marzel, a prominent extremist settler, stood on a Palestinian flag in an obvious attempt to provoke olive harvesters.  The military intervened as anger flared between the two groups and sent settlers back to their settlement.

Badia Dwaik, 38, is the Deputy Coordinator of Youth Against Settlements, a nonviolent Palestinian group campaigning against Israeli settlements.  He stressed that olive harvesting in Tel Rumeida is not just about economic necessity; it is a form of political defiance and a way to “confirm our existence and to encourage the people to resist”.

The Palestinian land in Tel Rumeida is surrounded by four illegal Israeli settlements.  A Palestinian educational centre overlooks steep, dusty terraces to the south which contain around 200 olive trees.  The centre, established in 2006 after the building was reclaimed from Israeli military control, and the olive groves below have been subject to repeated attacks and incursions by settlers in recent years.  Anti-Palestinian graffiti and the Star of David is clearly visible under fresh coats of paint on the walls at the back of the building, only metres away from a settlement.

The olive groves contain around 200 olives trees and olives were picked on around 70 trees today.  Badia Dwaik lamented the poor quality of the olives and the sparse fruit on many of the trees, saying that Palestinians are often unable to tend the land for fear of settler attacks.  There is also a chronic shortage of water in Hebron and the owners of the trees are denied permits to dig the land. For example, the YAS reported having problems with water circulation for three days and discovered today that the water lines had been deliberately cut.

According to Badia Dwaik, the YAS intend to continue picking the olives in the coming weeks as “people are scared to come and pick olives alone.  And it gives a message: we will continue and never give up.”