Ibrahim Omar Serhan, 21 years old, was left to bleed to death by the Israeli Occupation Forces, on July 13, 2011

A 21 year-old student was killed by the Israeli army on July 13th in Al Faraa refugee camp, whilst on his way to prayer.

Around 3:30 am the Israeli military entered the refugee camp with several heavily armed vehicles. Ibrahim Omar Serhan, a student at Al Najah University, was on his way to the mosque when he came across a group of soldiers standing approximately twenty meters away.

The soldiers ordered Ibrahim to stop; frightened, he turned around and tried to run away. As he was fleeing, soldiers shot Ibrahim twice from behind – once in each leg – rupturing an artery. Ibrahim managed to get to a house nearby where a local person gave him some basic first aid. Fearing for his safety, people from the camp moved him to a second house away from the soldiers.

He stayed in this house for around twenty minutes waiting for the ambulance, which was delayed due to the army presence in the camp. Soldiers followed the trail of blood that Ibrahim had left on the ground, and forcibly entered the house to arrest him. The family of the house unsuccessfully tried to  prevent the soldiers to take him, pleading with them to wait for the ambulance. When the ambulance eventually reached the house, they were unable to assist as no one knew where Ibrahim had been taken. Ibrahim bled to death whilst in the custody of the army. Soldiers only handed Ibrahim over to the Palestinian medics once he was dead.

Ibrahim’s funeral took place at 1.30pm on the same day in the camp cemetery.

During the invasion, the Israeli army arrested fifteen people from the camp, three of whom are still in custody. 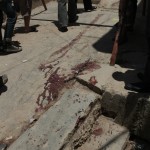 The spot where Ibrahim Omar Serhan was shot. 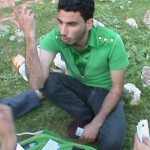 Ibrahim Omar Serhan, 21 years old, was left to bleed to death by the Israeli Occupation Forces, on July 13, 2011

Army incursion and arbitrary arrests in the camp have been frequent in the last few years. In 2008, Fadi Subuh and Mustafa Zalat, 21 and 25 years-old, were killed by the army whilst sitting with friends in the olive trees near the camp.

Al Faraa refugee camp is located in the Jordan Valley, seventeen kilometers North East of Nablus. The camp was established right after the Nakba in 1949 and comprises 8000 refugees from 80 different villages in Palestine 1948. The support of UNRWA, which has been working in the camp since 1950, has declined drastically in the last few years: food relief is now only being distributed to 50 families. Unemployment in the camp now exceeds 70%.