On Saturday 9th July, seventy people – including thirty internationals from Sweden, France, Britain, Australia, Mexico, the United States and Denmark – demonstrated at a military checkpoint outside Nabi Saleh, after the army denied them entry into the village where Palestinians lead peaceful demonstrations weekly.

The demonstration was planned six months in advance by Welcome to Palestine, in order to kick off a week of action. The buses carrying demonstrators were attempting to enter the village of Nabi Saleh, but when people dismounted the buses and began walking towards the military checkpoint, Israeli soldiers responded with volleys of tear gas and sound bombs.

Thirty people managed to reach the checkpoint, with others being pushed back by clouds of tear gas and smoke from fires started by canisters. Soldiers pointed their weapons at the demonstrators and fired tear gas directly at individuals, as the unarmed protestors formed lines to chant ‘We are peaceful, what are you?’

Three Israeli activists were arrested, while one Palestinian boy was shot in the leg with a canister. Other demonstrators severely beaten by the soldiers.

The army only allowed the buses carrying demonstrators to leave with a military escort, which took them to Ramallah.

There are demonstrations every Friday in Nabi Saleh, where the Israeli military has a history of responding extremely violently and often invading the village. 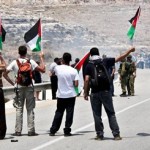 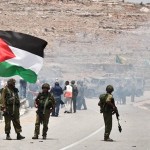 Tagged with: An Nabi Saleh Demonstration Denial of Entry Flytilla Welcome to Palestine