The initial attack happened at 12.05pm local time. There were four people aboard the Oliva boat at the time, two CPS Gaza crew members (from the UK and Sweden), the captain and a journalist.

British human rights worker Ruqaya Al-Samarrai stated: “We were fewer than two miles away from the Gaza coast when they fired at us. We saw them firing water at some fishing boats so we headed to the area. When we got close, the warships left the fishing boats, and turned on us. They attacked us for about ten minutes, following us as we tried to head to shore and eventually lagged when we reached about one mile off the Gaza coast.”

A fishing boat was also fired at and damaged with live rounds. Currently Israel claims to allow fishing boats to work within three miles off the coast of Gaza, but the limit is rarely respected and fishermen as close as 1.5 nautical miles are regularly targeted. 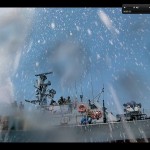 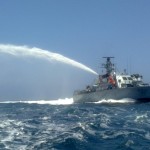 Restrictions on the fishing zone are of comparable significance to Palestinian livelihood. Initially 20 nautical miles, it is presently often enforced between 1.5 – 2 nautical miles (PCHR: 2010). The marine ‘buffer zone’ restricts Gazan fishermen from accessing 85% of Gaza’s fishing waters agreed to by Oslo.

During the Oslo Accords, specifically under the Gaza-Jericho Agreement of 1994, representatives of Palestine agreed to 20 nautical miles for fishing access. In 2002 the UN Secretary General Kofi Annan empowered Catherine Bertini to negotiate with Israel on key issues regarding the humanitarian crisis in the Occupied Palestinian Territories and a 12 nautical mile fishing limit was agreed upon. In June 2006, following the capture of the Israeli soldier Gilad Shalit near the crossing of Kerem Abu Salem (Kerem Shalom), the navy imposed a complete sea blockade for several months. When the complete blockade was finally lifted, Palestinian fishermen found that a 6 nautical mile limit was being enforced. When Hamas gained political control of the Gaza Strip, the limit was reduced to 3 nautical miles. During the massive assault on the Strip in 2008-2009, a complete blockade was again declared. After Operation Cast Lead, the Israeli army began imposing a 1.5 – 2 nautical miles (PCHR: 2010).

The fishing community is often similarly targeted as the farmers in the ‘buffer zone’ and the fishing limit is enforced with comparable aggression, with boats shot at or rammed as near as 2nm to the Gazan coast by Israeli gunboats.

The fishermen have been devastated, directly affecting an estimated 65,000 people and reducing the catch by 90%. The coastal areas are now grossly over-fished and 2/3 of fishermen have left the industry since 2000 (PCHR: 2009). Recent statistics of the General Union of Fishing Workers indicate that the direct losses since the second Intifada in September 2000 were estimated at a million dollars and the indirect losses were estimated at 13.25 million dollars during the same period. The 2009 fishing catch amounted to a total of 1,525 metric tones, only 53 percent of the amount during 2008 (2,845 metric tones) and 41 percent of the amount in 1999 (3,650 metric tones), when the fishermen of Gaza could still fish up to ten nautical miles from the coast. Current figures indicate that during 2010 the decline in the fishing catch continues. This has caused an absurd arrangement to become standard practice. The fisherman sail out not to fish, but to buy fish off of Egyptian boats and then sell this fish in Gaza. According to the Fishermen’s Union, a monthly average of 105 tons of fish has been entering Gaza through the tunnels since the beginning of 2010 (PCHR 2009).

Palestinian Centre for Human Rights. “A report on: Israeli Attacks on Palestinian Fishers in the Gaza Strip.” August 2009. http://www.pchrgaza.org/files/Reports/English/pdf_spec/fishermen3.pdf