Rae Abileah is dragged to the floor after disrupting Benjamin Netanyahu’s speech to the US Congress.

During the Joint Session of Congress while Prime Minister Netanyahu was speaking, Rae Abileah stood up from the gallery and shouted “Stop Israeli War Crimes.”

From the peace group CODEPINK, Rae is a 28 yr. old Jewish American of Israeli descent. She has traveled to Israel, the West Bank and Gaza and witnessed firsthand the reality of occupation and oppression. “Prime Minister Netanyahu says that the 1967 borders are indefensible. But what is really indefensible is the occupation of land, the starvation of Gaza, the jailing of dissenters and the lack of equal rights in the alleged Israeli democracy. As a Jew and an American taxpayer, I can’t be silent when these crimes are being committed in my name and with my tax money.”

Ms. Abileah grew up on Half Moon Bay and presently lives in San Francisco. She was arrested and charged with disrupting Congress. Upon release, she can be reached at 415-994-1723.

This protest is part of the week-long series of actions, organized by CODEPINK as part of a coalition of groups gathered in Washington D.C. for a campaign named Move Over AIPAC. During Netanyahu’s speech to AIPAC yesterday, 5 individuals interrupted Netanyahu and were removed from the building (see: http://bit.ly/aipac2011). 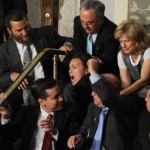 Rae Abileah is dragged to the floor after disrupting Benjamin Netanyahu’s speech to the US Congress. 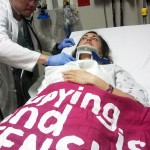 Rae Abileah in the hospital after being injured as police removed her from Congress. 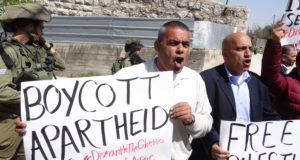