Member of the PLO Executive Committee and Chief Palestinian Negotiator Dr. Saeb Erakat was reacting to a report appearing today in the Israeli online Haaretz confirming that Israel stripped almost 140,000 West Bank Palestinians of their residency rights upon their departure from the occupied Palestinian territories between 1967 and 1994.

This represents 5.5% of today’s Palestinian population living in the West Bank . It also excluded around 20.000 Palestinian Jerusalemites whose residency rights have been revoked and hence have been denied the ability to return home.

“This report confirms our claims that Israel is engaging in a systematic policy of displacement in order to gain land for the expansion of more settlement-colonies and to change the demographic composition of the occupied Palestinian territories,” Dr. Erakat stated.

“This policy should not only be seen as a war crime as it is under international law; it also has a humanitarian dimension: we are talking about people who left Palestine to study or work temporarily but who could not return to resume their lives in their country with their families. It has been a crippling and life-changing situation that thousands of families have been forced to deal with since 1967,” Dr. Erakat added.

In statement sent out to press by the PLO office in Ramallah, Dr. Erakat pointed out that the report provides evidence that the Palestinian catastrophe is an ongoing process.

“Israel ought to restore residency rights to our people and permit families who have been separated for decades to be reunited. Israel’s actions violate the Universal Declaration of Human Rights which states that ‘everyone has the right to leave any country, including his own, and to return to his country’.”

In light of such Israeli actions, Dr. Erakat called on those states in the international community that have yet to recognize the Palestinian state on the 1967 border to join those who have already done so. “Our right to self determination must not be subject to negotiations, including the right of our families to live in their homeland. It is time to put an end to the pain and humiliation caused by the continuation of the Israeli occupation,” he concluded. 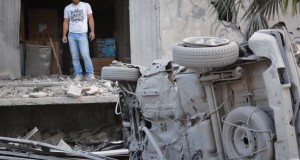