Halaa aged 6, kicked by soldiers as they raided her home

On Saturday night the Israeli army once again raided Awarta, putting the village under curfew for the fifth time since the murder in the illegal settlement of Itamar on 11th March. Awarta is situated next to Itamar and has endured a constant military presence for a month now.

According to the village mayor Qays Awwad, 23 people were arrested in the latest night raids; 20 males and three females.

One of the females arrested on Saturday night was 14 year old Julia Mazen Awwad, who was taken from her home together with her mother and father; Noaf and Mazen Awwad. Two days earlier, her two brothers; George and Hakeem were arrested, leaving only the smallest children not in Israeli custody. They were left alone after the latest arrests and were taken care of by one of the family’s neighbors until their mother was released Monday morning. Their sister, brothers and father remain in Israeli custody

One of the families that had their home raided is the family of Muhammad Fawsi Awwad.
At 4 am, while Muhammad was sleeping in his brothers home, Israeli soldiers awoke his sleeping wife and six children by throwing sound bombs threw every window of the house. After entering the house, the soldiers forced the family to go outside and to sit on the ground while they were still in their pyjamas. One of the daughters, Halaa, who is six years old, was kicked by the soldiers in the process. Her brother, Amjad, 19 years old, was locked inside the bathroom where he had to stay for six hours, while the soldiers completely destroyed his family’s home from the inside. International activists who came to the house after the soldiers had left witnessed the devastation: windows, mirrors and photo frames had been smashed, wardrobes and beds were broken, the washing machine made useless, the bathroom sink was completely demolished, school books were ripped into pieces and oil poured into the sugar supply.

After destroying the family’s home, the soldiers arrested the sons – Majdi Awwad (20), Amjad (19) and Hakam (18) and took them to the Huwwara military base together with their father who had come home in an attempt to help his family. The remaining children and their mother have no place to sleep since their beds have been destroyed and the children are too scared to stay in their home.

Windows smashed by sound bombs in the night

At 5 am, the soldiers arrived to Muhammad’s brother’s home. Hassan Fawsi Awwad and his family were also woken by sound bomb being thrown through their windows before the soldiers entered the house. The soldiers only stayed for 30 minutes, but managed to destroy the family’s washing machine and to pour sand and flour on the floor, before they arrested Hassan and left. This is the second time Hassan has been arrested since the beginning of the curfews. According to his wife Iman, and other eyewitnesses, he was blindfolded and handcuffed before he was forced to walk the road up the center of the village, the soldiers beating and kicking him along the way.

Ayoub Mustafa Daraoshi, 22 years old, was taken from his home at 10 am Sunday morning. According to his mother and his brother, who witnessed the arrest, the soldiers poured petrol on the piece of fabric they used to blindfold Ayoub with. After being blindfolded and handcuffed, he was dragged out on the ground just outside the house where he was beaten and kicked by the soldiers for an hour. At half-past midnight the night before, the soldiers had also arrested his 13- year- old brother Naje. He was forced to walk up to the center of the village where he was put in a military jeep and taken to the police station in the illegal Israeli settlement of Ariel. Naje, who was accused of throwing stones at military jeeps was kept in custody for five hours and questioned without his parents, or any lawyer being present, before he was released, contravening both international and Israeli law.

Since the brutal murder of five member of a settler family in the nearby illegal Israeli settlement of Itamar, hundreds of Awarta residents have been arrested, amongst them elderly, women and children. Some have been released after a couple of hours while others have remained in Israeli custody for one month, without being charged with any crime. 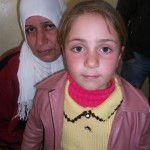 Halaa aged 6, kicked by soldiers as they raided her home 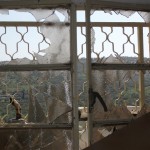 Windows smashed by sound bombs in the night 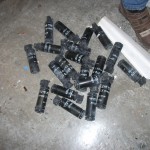 20 sound bombs thrown into one house on one night 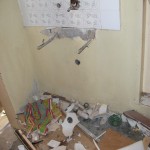 Sink torn off the wall 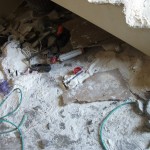 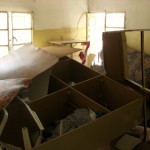